The power of the "Basij Thug" (UPDATED!)


The War of Words:

The "Basij" is a paramilitary organization founded by Ayatollah Khomeini which is subordinated to the "Pasdaran" (Army of the Guards of the Islamic Revolution - a very powerful elite military force independent from the Iranian armed forces) and which was used in major assault operations during the Iran-Iraq war. Nowadays, the Basij are an auxiliary force for emergency situation which range from disaster management to law and order and riot control. As such, they often loathed by opponents of the Iranian regime.

Anybody who has been keeping up with the recent news from Iran must have noticed, albeit mostly possibly, that the Basij are almost invariably described as "Basij thugs". But where did that idea of Basij being "thugs" come from?

Let us assume, for the sake of the argument, that indeed, the Basij are composed almost exclusively of thugs, nasty thugs at that, and that they use every opportunity to beat, maim, molest and abuse innocent Iranians. And then, let's ask this simple question:

[Now please, those of you who did use that expression on my blog, do not rush to google in order to try to find proof of Basiji thuggery. Now is too late. No, my question was different. Did any of you actually do some serious research to establish the thuggish nature of the Basij *before* you used the words "Basij thugs"?]

The reality is that the entire concept of "Basij thugs" has exactly the same roots as, say, "Serbian Chetnik" or "Palestinian terrorist". While there are undoubtedly Basiji thugs, Serbian Chetniks and Palestinian terrorists out there, the use of these terms by people who have only second hand knowledge of Basijis, Chetnicks or Palestinians is a modern form of Orwell's "two minute of hate" - they serve to disconnect any rational thought and make a fact based and logic driven analysis impossible.

The Empire has always excelled in carefully framing the debate and giving the gullible public well identified targets for outrage and hatred. In the case of Iran, the millions invested by Uncle Shmuel in its strategic psyop campaign are now handsomely paying off.

The War of Images

By now we probably all have seen the terrible images of the young lady shot in the streets of Tehran. (If not, you can see these images here). The videos are identified as "Shot by Basij" and "Basij shoot to death a young woman". Here is the text which is circulated with the videos: 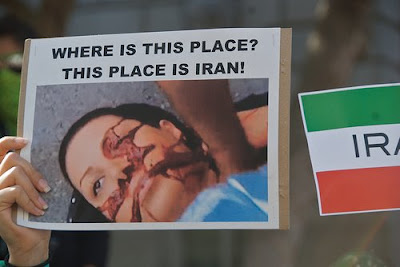 At 19:05 June 20th
Place: Karekar Ave., at the corner crossing Khosravi St. and Salehi st.
A young woman who was standing aside with her father watching the protests shot by a basij member hiding on the rooftop of a civilian house. He had clear shot at the girl and could not miss her. However, he aimed straight her heart. I am a doctor, so I rushed to try to save her. But the impact of the gunshot was so fierce that the bullet had blasted inside the victim's chest, and she died in less than 2 minutes. The protests were going on about 1 kilometers away in the main street and some of the protesting crowd were running from tear gass used among them, towards Salehi St.

Amazingly, a number of absolutely basic questions are *not* asked about this shooting:

1) "Shot by" - what kind of evidence is there that the shot came from the person identified as the shooter since the same text says that this person was hiding. Maybe somebody else was hiding also? Is there any ballistic evidence identifying the guy on the roof as the shooter?

2) "a Basij member hiding on a rooftop". How do we know that he was Basij?! Did he somehow identify himself after the shooting? (not before, since he was, quote "hiding").

3) "He could not miss her". Shooting down from a rooftop? What was the approximate distance and weapon used?

4) "He aimed straight at the heart". Wow! Not only are we told who shot the lady, but we even know what the shooter was aiming at. Now how could anybody know this unless the shooter was interviewed before or after the shooting. Also, this "Basij thugs" is clearly a elite marksman using a sniper rifle.

5) "I am a doctor". Wait - from all of the above I was under the impression that the author of this text was not a medial doctor, but a ballistics expert. Either that, or a psychic...

We will probably never find out what really happened that day. And maybe the lady was shot by a a member Basij. But then, maybe not. Could have been another shooter, could have been a totally missed shot by somebody with only very basic weapons skills, could have been a lost bullet, or it could have been a carefully orchestrated incident, with an elite marksman carefully aiming at a young lady (not a masked men or an old woman dressed in black - these would not make for adequate victims) with just the right folks standing nearby to take the seminal images proving the "barbarity of the Basij thugs unleashed by the corrupt regime of the Mullahs against the liberty-aspiring Iranian youths".

Those familiar with what happened in Venezuela during the famous scene of "Chavez' thugs shooting at unarmed peaceful demonstrators on a bridge in Caracas" know exactly what I am talking about here. Those who have not seen this video can order it here or download it from the Internet.

Lastly, nobody is asking the age old question: Cui Bono? Who has the most to gain (or the most to loose) from all this?

UPDATE1: The anwer to this question has kindly been provided by, of all things, the Jewish Telegraphic Agency in its article "Iran turmoil likely to benefit Israel":

Like the collapse of the Soviet Union nearly two decades ago, the outcome of the post-election unrest in Iran could be of major strategic significance for the Middle East and for Israel.

* President Mahmoud Ahmadinejad and the ruling ayatollahs use force to reassert the authority of their regime.

* The unrest takes on a dynamic of its own, driving the ayatollahs from power.

In each scenario, Israel stands to benefit.

(Make sure to follow the link above and read the rest. It's a great read)

We don't even ask whether the action of one man (the putative "Basij thug" on the rooftop) tell us anything at all about the regime in power. After all, innocent people have been shot by law enforcement officials in every single country on the planet, even the most democratic one.

Any time you give guns to a large amount of people you will be giving guns to a certain percentage of clumsy idiots and/or morons who like the power and authority a gun gives them. I can almost guarantee you that sometime this week, some Basiji shot *himself* by mistake. The same would have happened in any country. Does any of this tell us anything useful or relevant about Iran?!

This is the real power of the "Basij thug". No, not the actual Basij member (whether thug or not), but the power of the idea of the "Basij thug". This concept achieve as suspension of thought, a kind of blind acceptance of a carefully tailored narrative which then explodes into a "two-minute of hate" kind of hostility towards the object of this debate-framing technique.

If anything, the current events in Iran have shown that the Western public has learned exactly *nothing* about how it has been manipulated for many decades already. The Empire is using the exact same techniques and, amazingly, it still achieves the exact same results. The gullible comemierdas (as they are so aptly called in Spanish) still are eager to gobble down whatever the Empire wants them to feed on.

No wonder our Imperial masters despises us and treats us like slaves. We deserve it.

PS check out Craig Paul Roberts' latest article "Iran Falling to US Psyops" and listen to his recent interview on this topic.

UPDATE2: PressTV has just reported that the Tehran police denied that *any* shots at all were fired by its personnel on Sat. (thought whether this includes Basijis is unclear). PressTV is also reporting that some "armed vandals" have killed several people and that these "vandals" were arrested. (Not that any such denials or reports will have the slightest impact on those who have already decided that they 'know" who shot the young lady).