News update about the Freedom Flotilla 2

Preparation is already well underway for an even larger “Freedom Flotilla Two” to be launched in the coming weeks. The new flotilla will travel to Gaza again in matter of weeks. Statements by the EU, the UN and others have made it imperative that Israel obey international law and lift the blockade. For example, US Secretary of State Hillary Clinton has stated that the siege is “unsustainable and unacceptable.” While Israel does have genuine security concerns, this does not allow it to break international law.

Contrary to Israeli spin-doctors, we want to emphasise that both the current and future flotillas are humanitarian and comprised of civilians working with other civilians, without support for specific Palestinian political parties. The humanitarian aid flotillas will continue to be sent until the siege on Gaza is lifted. We expect the international community to turn their strong words about the need to lift the siege on Gaza into concrete action. If governments don’t step up to insist that Israel abide by international law, civilians will continue to do the work.
----

The "European Campaign to End Siege on Gaza", announced that it already obtain the funding of the first three ships of the new fleet which will go to the Gaza Strip, which will be named "fleet of Freedom 2", related to the name of the First Fleet, who was exposed to piracy and a bloody massacre by Israel against the peace activists on board. 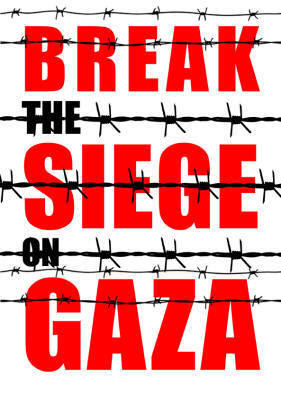 Dr. Arafat Madi, president of the Campaign, one of the founders of the fleet of freedom’s coalition, said in a statement:" The extensive calls are taking place to launch a new fleet to the Gaza Strip, involving many ships, will be carrying on board more aid and more peace activists than “Freedom 1” which was carrying ten thousand tons of aid and hundreds of peace activists from more than forty countries around the world.

Madi added, “following the massacre committed by Israeli forces against the peace activists on board the fleet of freedom, in regional and international territorial waters; Arab, Islamic, European and Western calls increased to form a fleet, larger than “freedom1”, in clear defiance by the liberals of the world, who rose up around the world to condemn the horrible massacr and against the Israeli arrogance.

The President of the European Campaign , the Brussels-based, confirmed that the “fleet of Freedom 2” is expected to start sailing in the coming weeks, adding that it would be larger inthe quantity and quality than “fleet of Freedom 1”, and would be formed by the will of the free world to break the Israeli unjust siege on Gaza.