12 American Warships, Including One Aircraft Carrier, And One Israeli Corvette, Cross Suez Canal On Way To Red Sea And Beyond

by Tyler Durden for Zerohedge

(thanks to L. for pointing out this item to me - VS)

Arabic newspaper Al-Quds al-Arabi reports that 12 American warships, among which one aircraft carrier, as well as one Israeli corvette, and possibly a submarine, have crossed the Suez Canal on their way to the Red Sea. Concurrently, thousands of Egyptian soldiers were deployed along the canal to protect the ships. The passage disrupted traffic into the manmade canal for the "longest time in years." The immediate destination of the fleet is unknown. According to Global Security, two other carriers are already deployed in the region, with the CVN-73 Washington in the western Pacific as of May 26, and the CVN-69 Eisenhower supporting operation Enduring Freedom as of May 22. It is unclear at first read what the third carrier group may be, but if this news, which was also confirmed by the Jerusalem Post and Haaretz, is correct, then the Debka report about a surge in aircraft activity in the Persian Gulf is well on its way to being confirmed. There has been no update on the three Israeli nuclear-armed subs that are believed to be operating off the coast of Iran currently.

From the original article, translated by Google and Zero Hedge:

Shipping sources in the city of Suez on Friday have said that 12 U.S. warships, including a giant Israeli warship, have crossed the Suez Canal in the early hours of dawn on Friday, en route to the Red Sea coast, at the same time as the channel has seen large numbers of soldiers. According to sources and eyewitnesses 'The Suez Canal traffic was disrupted for hours in the morning during the crossing of U.S. Navy, which includes a giant aircraft carrier, soldiers, ships and infantry, armor and ammunition, coming from the Mediterranean Sea on its way to the Red Sea'. The sources revealed that many merchant ships were disrupted outside the channel until the completion of the Navy passage, which observers said was one of the longest since several years. The sources added that the movement of fishing boats in the Bitter Lakes and Lake Gator and navigation between the two shores of the Suez Canal over the Peace Bridge and ferries of individuals and vehicles may be stopped completely.

Egypt deployed thousands of soldiers on both sides of the Suez Canal for insurance; witnesses said 'The Israeli warships were seen among the U.S. warships but official sources have not confirmed the information'.

Maj. Gen. Amin Radi Secretary of the Committee on National Security in the People's Assembly made an exclusive statement to to Al Quds Al Arabi, that the "decision to declare war on Iran is not easy, but Israel was known for her Beslvha and Arabdtha may provide to the war in order to maintain its leadership in the region as nuclear weapons are the only deterrent."

Radhi said, 'should be the scourge of Israel tend to be left a free hand should be forced by the international community to disarm its nuclear weapons before calling for strike on Iran'. In a related development, the opposition warned from various that the Egyptian regime that allows a repeat of the historica mistake when opening the Suez Canal to cross the fleet-American attack on Iraq in this context, Abdullah said Alsnanwi editor of 'Arab Nazareth' for 'Al Quds Al Arabi' that 'the Egyptians will not stand idly by this time they see the system of government in a major scandal in coordination with Israel and America to open the Suez Canal to attack Iran and Islam." He expressed surprise at the crossing of a huge number of American battleships, along with an Israeli sub carrying nuclear warheads, and wondered, what is the secret channel those huge numbers of warships to the Gulf, and he believed the difficulty to enter the U.S. facing big problems in Afghanistan and Iraq to open a front with Iran.

For his part, the leader of the Brotherhood warned of the consequences of a strike on Iran, stressing that accept the Arab and Muslim world such a thing is unacceptable and should not be silent if the masses bowed to the will of the governments in Washington and Tel Aviv.

The international media has pointed to the direction of an Israeli nuclear submarine model 'Dolphin' carry nuclear warheads and warships to the Gulf region in light of tensions with Iran.

With Iran warned Friday that any act against the interests of the Iranian people, legal and legitimate will result in legal response and appropriate action by Iran, said U.S. Defense Secretary Robert Gates said Thursday that U.S. intelligence that indicates that it is likely to possess Tehran the ability to attack Europe ' tens or even hundreds of rockets' taken into account in the Government's decision to modify the Obama system for missile defenses. The United States has cited the growing threat of Iranian missiles when it announced in September (September) last plans to integrate missile defenses at sea and ashore in the member states of NATO in Europe and around the States in what was dubbed 'adaptive phased approach'. Gates said in a hearing on Congress 'among the elements of information that contributed to the decision to approach the interim adjustment to recognize that if Iran actually launched a rocket attack on Europe would not be just a missile or two or a few. He added, 'but is likely to be attacked with a barrage of missiles because of its potential to deal with tens or even hundreds of rockets'.

We have submitted a query to Hillary Clinton for confirmation, in advance of her meeting with Israel defense minister Ehud Barak, who flew in to the US on Saturday for meetings with the former first lady, as well as Robert Gates and Chairman of the JCS Mike Mullen. And yes, the Joint Chiefs of Staff don't really get involved in high level "diplomacy" all that often.

Update: it appears the Aircraft Carrier crossing the Suez is almost certainly CVN-75 Harry Truman, which until recently was in the Mediterranean according to Stratfor. According to Wikipedia, "the super carrier can accommodate approximately 80 aircraft." For some more curious information on the Truman, click here. 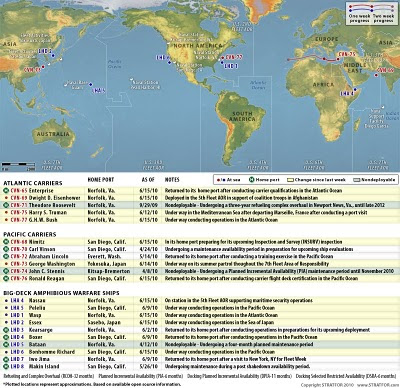