In light of President Bush's opposition to a resolution that would acknowledge the Armenian genocide, the question must be considered as to whether he is a madman who cannot be trusted with nuclear weapons.

U.S. press reports of Iranian President Mahmoud Ahmadinejad denying the Nazi genocide have been a flashpoint of the popular perception here that he is either insane or a beast. In either case, he is someone who must be attacked before he can obtain nuclear weapons.

When Ahmadinejad is asked these days whether the Nazi holocaust occurred, he says historians need to conduct more research. It is an answer that bears an uncanny resemblance to that of U.S. Secretary of State Condoleezza Rice when asked about the Armenian holocaust.

In this clip, when Rep. Adam Schiff (D-Calif.) asks Rice if there is any doubt in her mind that the murder of 1.5 million Armenians between 1915 and 1923 constitutes a genocide, she says, "I think that the historical circumstances require a very detailed and sober look from historians, and what we've encouraged the Turks and the Armenians to do is to have joint historical commissions that can look at this, to have efforts to examine their past, and in examining their past to get over their past."

This is akin to saying the Jews and Germans should get together and study this question of atrocities, and then for them both to get over it. "Lots of people are coming to terms with their history," Rice adds.

She goes on to say that she doesn't think the United States weighing in would help the process of reconciliation between Turkey and Armenia. Well, there's an answer Ahmadinejad might wish to consider next time a goofy "60 Minutes" guy asks him for his Holocaust position: "I don't think me giving an answer would help the Jewish healing process."

Why is there such a runaway-mad perception in the United States that Ahmadinejad is a runaway madman? It's because Vice President Dick Cheney and others in the Administration want to attack Iran, and they are flailing around for a casus belli.

The propaganda campaign against Ahmadinejad is working on two layers, like the trompe l'oeil of an improbable masterpiece. In the background we see hues of a kook with violent intent. Logic fades as we're beguiled by the colors; we forget that there are probably plenty of leaders around the world whose views would affront us, and that we normally don't bomb for beliefs. In the foreground are strokes outlining purported actions. These are things he hasn't just thought but done, such as the supplying of weapons that are killing our boys and girls in uniform. There's blood on his hands! We're already at war with him! The painting becomes vivid, and all sense is lost, as are recollections of the original crime of invading and occupying a sovereign nation.

In simple terms, the propaganda war seeks to prove two things: This is a bad person, and this is a person who has done bad things. One attacks a mode of thought, the other a mode of action. On the mode-of-thought level, Ahmadinejad is portrayed as guilty of two things: he wants to wipe Israel off the map, and he denies that the Holocaust occurred. Ahmadinejad's defenders dispute both, and they point to issues of context and translation. On the mode-of-action level, he is charged with supporting "terrorism" in Iraq with money and weapons.

It is hard to watch all the documentaries showing how we were duped five years ago and think that it could ever happen again, let alone so soon afterward. The pretext for invading Iraq was seen as a flimsy lie by nearly everyone in the world except the ideologically tiny island of people living in the United States. The propaganda washed like a tsunami over the minds of everyone on that island. And don't blame the hoi polloi. Journalists and "intellectuals" were the first to be swept away.

Now the Administration is seeking to disprove that infamous Texas slogan: "You can fool me, but you can't get fooled again."

Already the "intellectuals" have been suckered. Columbia University President Lee Bollinger called Ahmadinejad a "petty and cruel dictator" to his face and suggested he was "astonishingly ignorant." This from a man astonishingly ignorant of the fact that Iran's unelected commander-in-chief, the Supreme Leader Ali Khamenei, holds more power than its elected president, Ahmadinejad.

In Iraq, it was the supposed existence of weapons that might or might not be used against the United States that caused our leaders and citizens to support an invasion. A mighty thin veil for naked aggression. Now we're sifting through Ahmadinejad's speeches for attitudes that might predispose him to act in a certain way if he obtains weapons in a few years and is re-elected in 2009 though he's not even the commander-in-chief? How thin can the veil get? 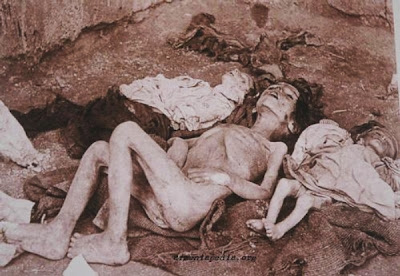 What about Turkey's denial of the Armenian holocaust? Do we even know who the leader of Turkey is, let alone if his eyes are too close together? No, no. We need Turkey right now to keep our occupation well-fed, as Defense Secretary Robert Gates reminded us yesterday. We can talk history another day.

But just like the Jews protesting Ahmadinejad's speech at Columbia University last month, the Armenians see the relevance of discussing history now. And if Bush and his crew continue to deny their genocide, they could take a page from Cheney's playbook and say that here is a lunatic country that must be stopped. It is a holocaust-denying nation that is considerably further along in its development of nuclear weapons than even Iran and more than anyone else has demonstrated a willingness to use them.

Could the friends of Armenia paint this into a picture that makes bombing the United States seem like the only sane solution? Nah, the only ones who would buy a painting like that are living all alone on a little island.

Brendan Cooney is an anthropologist living in New York City. He can be reached at: itmighthavehappened@yahoo.com
Posted by VINEYARDSAKER: at 00:42