Fascism alive and well in Florida (are your surprised?)

Probe Finds Taser Use on Student Was OK

University of Florida police were justified in using a Taser against a student who refused to stop questioning Sen. John Kerry on campus last month, according to a state investigation released Wednesday.

Some had questioned the use of force in using the stun gun against Andrew Meyer, leading to the investigation by the Florida Department of Law Enforcement. A summary of the agency’s report was released Wednesday.

“In short, the FDLE determined that our officers acted well within state guidelines,” university President Bernie Machen said in a letter to students, faculty and staff members.

Two officers who were placed on administrative leave pending the outcome of the investigation were reinstated Wednesday, Machen said. 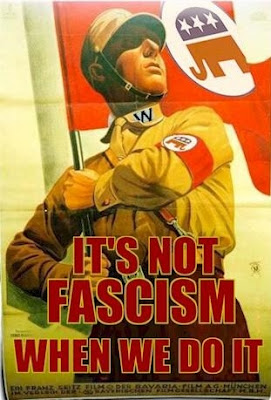 Rob Griscti, Meyer’s attorney, said he couldn’t comment on the report with a criminal case still pending. He said he’d respond after examining the report.

Meyer, a journalism major, is known for posting practical jokes on his Web site, but Griscti said his client’s questions for Kerry were serious.

“He raised questions about voter disenfranchisement and other matters about American voting rights, which cut to the heart of our Democracy,” Griscti said in a written statement. “These questions deserve the media’s attention and full public discourse.”

The scuffle between Meyer and police started during the Sept. 17 speech by Kerry when Meyer refused to leave the microphone after his allotted time was up, police said. The videotaped altercation and Meyer’s cries of “Don’t Tase me bro!” were played frequently on the Internet.

“Officers decide not to escalate to hard empty hand strikes, kicks, knees or baton … (it) would have looked like the officers were beating Meyer into submission,” the report said.

The report, which has Meyer’s name and that of other students blacked out, said the officers did what was necessary to control the student.

“Our purpose is, and has always been, to ensure a civil and safe environment where the many types of campus activities and open discourse can occur,” said Police Chief Linda Stump.

Meyer has been charged by police for resisting an officer and disturbing the peace, but the State Attorney’s Office has not yet decided whether to file formal charges.

Spencer Mann, a spokesman for the State Attorney’s Office, said the decision may be made some time next week.
Posted by VINEYARDSAKER: at 18:04