Nancy Pelosi and the Arrogance of Power

"They are advocates. We are leaders."
House Speaker Nancy Pelosi in regards to "Anti-war activists."

People of America, this is truly the problem with what was once a Representative Republic and now is a country run by "elected" officials who believe that they, individually and collectively, are above any accountability and are not answerable to their constituents. Our public servants erroneously believe that they are the leaders!

Ms. Pelosi made this statement to a group of reporters at a luncheon recently and she also went off on activists who have been participating in vigils outside of her chi-chi home in the Pacific Heights district of San Francisco. The people who are vigiling outside her house regularly, in a Pelosi Watch are only exercising their rights as American citizens to make their concerns known to a Rep who was elected from a district that is wholeheartedly against the occupation of Iraq and for impeaching the liars who got us into the illegal and immoral situation.

No, Ms. Pelosi, you are not a leader. You have proven time and again in what you laughably believe is a "mistake" free run as Speaker of a Democratic House that you will do anything to protect an Imperial Presidency to the detriment of this Nation and the world, particularly the people of Iraq and Afghanistan.

This Democratic Congress supported BushCo's disastrous and deadly surge; handed him over billions of their constituent's tax dollars to wage this murder; have by their silence and votes countenanced an invasion of another country; approved more restrictions on the rights of the citizenry to be protected against unreasonable search and seizure; Ms. Pelosi does not even know if "torture" (which violates international law and the 8th Amendment in our Bill of Rights) is an impeachable offense; and worst of all the impeachment clauses were taken "off the table" in an ongoing partnership with BushCo to make the office of the presidency a Congressionally protected crime conglomerate that is rapidly sending this Nation down a crap-hole of fascism. So, Congress has led us to a few things: war, poverty, oppression, unemployment, and an inexplicable continuance of the Bush Regime. 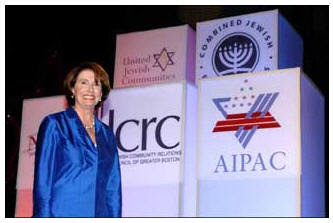 No, Ms Pelosi, you are not even a leader in the very narrowest of definitions. We do not elect our Congressional Representatives to be leaders, not to be used as willing marionettes for the war machine and other special interests that serve the elite to the detriment of the rest of us, but to represent the will of the people. We send our elected officials to DC and pay their salaries and subsidize their benefits to do the "Will of the People."

No matter how many times Ms. Pelosi and George Bush share tea and giggles and no matter how often she "prays' for him, George is not the Decider and she is only the Leader of the House of Representatives not the people. We are the sovereigns in this country and I tried to demonstrate this when I demanded a meeting with another haughty public servant: George Bush.

I cannot speak for every Democrat, Independent, Green or disenchanted Republican (and there are many) in America, but the consensus from my travels all over this country is that we put Democrats back in power in both Houses of Congress to be an opposition to the Bush Regime and to stop the annoying "bobble-headed, rubber-stamping" approval of all things criminal and murderous. We did not wish to keep heading in the same direction but desired to go another way, which would have required the Dems to finally step up and forcefully counter and stop the high crimes of BushCo. They have failed. 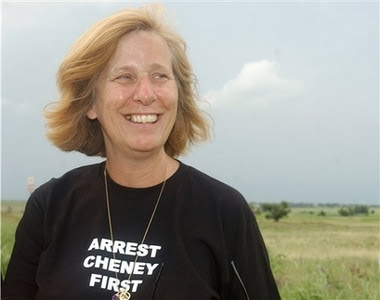 We are sick of excuses. We are tired of the blame being diffused on the Senate, the Blue Dog Dems, the Republicans or even, incredibly, the people of Iraq. A true leader accepts responsibility in ways that are not even dreamed of by BushCo or Congress Inc. A true leader would stand up and do what is intelligent and what is right and if he/she were a leader then people would follow. A leader does not wait idly by for a crowd of sycophants to gather around her before she does her job with integrity and courage; a leader leads the way and the Democratic Congress with an approval rating even lower than George's had better wake up to whom they need to follow: us!

We have countless examples of true leaders throughout American history and if not for them, women would not have the right to vote, much less be Speaker of the House; Black Americans would still be slaves or at the very least still drinking out of separate fountains; workers would not have the right to unionize and children would still be mining coal; we would still have troops in Southeast Asia, and we would still be under the aegis of our close Cousins in Empire: the British. Some of our courageous leaders have had to pay the ultimate price for their bravery and vision and Ms. Pelosi should be ashamed of arrogantly whining over her rubber chicken that Americans exist who want her to do her job because people are dying and lives are being ruined with her complicity.

We not only have the right and the responsibility we have the power.

Cindy Sheehan can be reached at: Cindy@CindyforCongress.org
Posted by VINEYARDSAKER: at 01:44