It is too early to post a formal SITREP simply because the situation is way too confused, but I want to give you all a small heads-up on what is happening right now.  Take a look at that map:

The city on the top right is Luganks, center Left Donetsk and to the south you have the border with (Russia indicated by РОССИЯ).  In blue the Ukie forces and in red the Novorussian ones.

First, there are reports that the Novorussians have taken both the Donetsk and Lugansk airports.  However, the Ukie sides claims that it had liberated the Luganks airport were Ukie forces had been surrounded for many weeks by the Resistance.  Obviously, these are mutually exclusive claims.  Finally, the Resistance also said that it had used a captured Su-25 close air support aircraft to attack Ukie positions and that this Su-25 had taken off from the Lugansk airport (FYI - the Su-25 does not need a runway to take off, it could even do that from a grass field).

Second, the Ukie have attempted an envelopment maneuvere in which they hope to surround Donetsk and then cut the city off from Lugansk.  This maneuver apparently failed and with a Resistance counter-attack from around Saur-Mogila (САУР-МОГИЛА on the map) the Resistance is attempting to surround and "squeeze" the Ukie force along the Russian border.  The Ukies, who clearly now see the danger are making a desperate effort at breaking through the Amvrosievka (АМВРОСИЕВКА on the map) to prevent that and to free the Ukie forces.

So what is at stake?

There are reportedly 3000 Ukie soliders currently surrounded in the "southern cauldron" as the region along the Russian border has been called.  Here is what two of them who managed to escape are saying about their situation:


The situation is such that the battalion is in a difficult situation, both in terms of resources and its territorial position. What they show in the news – that we are encircling the separatists – is, where out battalion is [stationed], exactly the opposite. The guys are at the end of their rope. It’s trouble there. It’s a disaster.  On one side, there are the forces of the Russian Federation standing there, practically 4 kilometres from us. And there is such military equipment there, believe me, that nothing would help us. It’s no longer about flack jackets and military equipment. Do you understand? It’s a completely different [situation]. We just have to get our guys out of there.  Unequivocally, the battalion can’t remain there. Well, the guys stationed there, they are like condemned men facing execution. I say this responsibly – I was stationed there and I came from there. And even then, we have to take them out, carefully. We have to take them out, carefully.  And, honestly, I don’t know how this [rescue] is to be done but it must be done. It must be done and it must be done immediately.  Let me repeat, the situation as of today’s morning, I called there and I called yet again: not a single unit of military equipment has arrived, they [the soldiers] are standing in an open field.  Because the battalion we talk about, as a matter of fact, they can perform combat mission only as formulated in the beginning – i.e. guard duty of [important strategic] objects in the region, let’s say, guarding certain checkpoints, but only further away from the epicenter of hostilities.  However in the midst of combat action it can’t fulfill any mission because of the lack of needed equipment. Even if such equipment were to be provided to the battalion, there is nobody trained to use [it].

Now let's look at Lugansk, specifically at the airport. 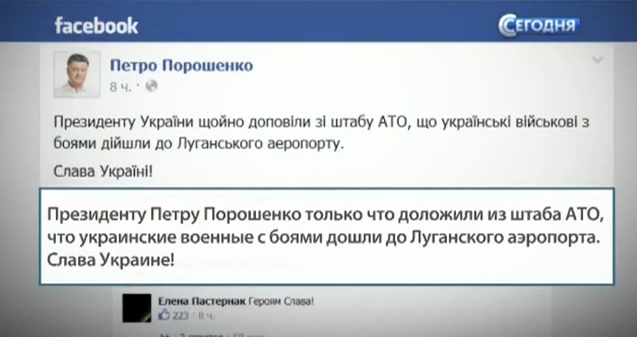 Translation: President Petro Poroshenko has just been informed by the headquarters of the ATO (anti-terrorist operation) that Ukrainian forces sucessfully thought their way to the Lugansk airport.  Glory to the Ukraine!

Well, I am not sure as to what to make of that. Both sides are claiming victory here and the reason for that is quite simple: the forces which had been (or still are) surrounded at the Lugansk airport were some of the very best the Ukies had: elements of the 80th Airborne Regiment, 25th Airborne Division and the 8th Special Forces Regiment.  Furthermore, the airport is the crucial node for any encirclement of Lugansk.

There is little doubt that the Ukies are throwing in their best resources to avoid a disaster and that at least three Ukie armored columns were sent in to relieve the pressure on the surrounded Ukie forces.  At least one of these columns (possibly two) were detected and destroyed.  Here is some footage of the aftermath:

In this case, this column was apparently destroyed near the town of Marinovka (not shown on the map above).

The video above shows what is apparently another Ukie column destroyed near Lugansk.

The Ukies also lost an An-26 transport aircraft, also near Lugansk, which was apparently shot down by a missile.  The Resistance claims that it did it, but the Ukies say that the missile was fired from Russia.

While all this seems to be excellent news for the Novorussian Resistance, Strelkov is, as usual, much more cautious:

As for the latest news out of the Russian media, this is what their correspondents are reporting:
Interestingly, Russian experts are speculating that the combined attacks on Lugansk and Donetsk were distracting attacks aimed at drawing Resistance forces away form the south were up to 5'000 Ukie solidiers had attempted to cut off Novorussia from Russia and surround both Donetsk and Lugansk.  According to the same sources sources, this feint failed to deceive the Resistance forces.  The Ukies then failed to take the hill Saur-Mogila and ended up being surronded in the so-called  "southern cauldron": a long corridor between 4km and 8km in width.  It appears that the Resistance forces did manage to cut off the Ukie corridor in several locations where the mined the fields before withdrawing.  The Resistance is now engaging these forces with artillery from a longer range.

We should note that, at least so far, Kiev has categorically denied all of the above.

Still, that version would explain the number of Ukie strikes on Russian border posts all along the border.  Add to this that Lavrov issued a stern warning about consequences which would be entirely the Ukie's fault, and you get the image: it is possible that Russia will simply strike the Ukie forces in the "souther cauldron" from within Russia.  Of course, and as always, they will do no such thing if the Resistance forces succeed in doing this without overt Russian help.

Stay tuned, as soon as the situation becomes clearer, I will post another SITREP.

UPDATE: thanks to 'SD' who send me a link to an article which claims that Russia is now considering "surgical strikes" on select key Ukie targets.
Posted by VINEYARDSAKER: at 17:59