Mossad Snatched Me, Handcuffed Me, Hooded Me

al-Manar reports:
Dirar Abu Sisi, the Palestinian engineer abducted from the Ukraine by Israeli Mossad agents last month gave an account of the incident in which he was arrested to a lawyer from the Palestinian Center for Human Rights (PCHR) earlier this week, the NGO reported on Monday.
On Sunday, Petah Tikva Magistrate's Court partially removed a publication ban and confirmed that Abu Sisi was being held at the Shikma Prison in Ashkelon.
PCHR said that Abu Sisi told the lawyer that on February 19 he was traveling by train from Kharkov to Kiev to meet with his brother Yousef when three persons, two in military uniforms, entered his room on the train. They asked him to show his passport but he refused. Then they threatened him and forcefully took his passport. They forced him to get off the train at the nearby station of Poltava.
Abu Sisi said that he was handcuffed, hooded and transported in a car to Kiev. Once in Kiev he was held in an apartment where there were another six persons who introduced themselves to be members of the Mossad. Abu Sisi said that the Mossad members immediately questioned him.
The Palestinian engineer said he was then put on a flight that lasted between four and five hours before landing in a place unknown to him. Approximately thirty minutes later, they took off again and the flight lasted for approximately one hour. Upon landing Abu Sisi found himself in “Israel”.
Abu Sisi told the PCHR lawyer that he was denied contact with a lawyer for fourteen days. This denial was extended for another eleven days. He said that he was placed under intensive interrogations and that he was denied his legal rights.
After speaking with Abu Sisi, PCHR expressed doubts about previous reports that Ukranian authorities had colluded in the abduction. He was not legally arrested by Ukranian authorities and made no appearances in Ukranian courts.
The human rights organization expressed concerns with Abu Sis's physical and mental health and called for his immediate release. 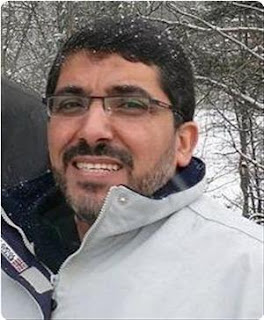 Abu Sisi is the manager of the only power plant in the Gaza Strip. He is not known to have any direct ties with Hamas or other organizations, although it is likely that his senior position was the result of political affiliation.
In interviews to foreign reporters, Abu Sisi’s wife Veronica, blamed the kidnapping on the Mossad, saying they did it to sabotage the Gazan power plant.
Posted by VINEYARDSAKER: at 20:44