In an interesting background analysis, the Jerusalem Post has revealed that influential Canadian and US Neocons supporters acting on behalf of the Israeli PR spin-doctors are behind the infamous House Resolution 21 almost unanimuosly adopted by Congress (with only Ron Paul and Dennis Kucinich voting against it).

The 411-2 vote by the US House of Representatives to implore the UN Security Council to charge Iranian President Mahmoud Ahmadinejad with violating the 1948 Genocide Convention represents a significant milestone in the campaign to use the instruments of international law against Teheran.

The legislation is nonbinding, but it clearly makes a legal determination that Ahmadinejad has engaged in "incitement to commit genocide" through his call that Israel be "wiped off the map."

The initiative to see the Iranian president indicted under the Genocide Convention began in New York on December 14, when former Canadian justice minister Irwin Cotler and Harvard Law Prof. Alan Dershowitz joined outgoing US ambassador to the UN John Bolton and an Israeli legal team at an event sponsored by the Conference of Presidents of Major American Jewish Organizations and the Jerusalem Center for Public Affairs at the New York Bar Association's offices.

Cotler's involvement was critical because, as Canada's attorney-general, he actually prosecuted Rwandan Hutus in Canada under the Genocide Convention for their involvement in broadcasting repeated calls over the radio for the massacres that led to the deaths of over 800,000 Rwandans, chiefly from the Tutsi tribe.

For Cotler, who still serves in the Canadian Parliament, Ahmadinejad's rhetoric was "as direct and public, clear and compelling" case of incitement to genocide as he had ever seen. And what made the Iranian declarations chilling, he explained, was Tehran's ongoing determination to acquire nuclear weapons, at all costs.

The case against Ahmadinejad picked up steam internationally. On January 25, two British MPs, Michael Gove (Conservative) and Gisela Stuart (Labor), invited former prime minister Binyamin Netanyahu, Cotler, and an Israeli legal team from the Jerusalem Center to appear in the House of Commons along with Lord David Trimble, who had won the Nobel Peace Prize for his involvement in Northern Ireland. The event and the lobbying it created had a definite impact.

As of Thursday, 69 members of Parliament had signed onto a motion that "urges the British Government to put forward a resolution at the United National Security Council demanding President Ahmadinejad be brought to trial on the charge of incitement to commit genocide."

On March 5, the Australian shadow foreign minister, Robert McClelland, also called on the UN Security Council to initiate legal proceedings at the International Court of Justice in The Hague, against Ahmadinejad for incitement to genocide.

A month later, the Canadian Parliament's Foreign Affairs Subcommittee on International Human Rights adopted a motion by Cotler to refer Ahmadinejad's genocidal incitement to the Security Council, in order that the International Court of Justice investigate and actually prosecute the Iranian president. Canadian Prime Minister Stephen Harper, who has characterized Ahmadinejad's rhetoric's as genocidal, will be critical for moving this initiative further in Ottawa.

The international community is not about to see Ahmadinejad in the seat of former Yugoslav and Serbian president Slobodan Milosevic in The Hague next week or next month. But the growing consensus that the Iranian president's statements constitute an actual breach of the Genocide Convention is still significant.

And beginning with Florida, more than a half dozen states across the US have considered adopting legislation requiring state pension funds to divest from companies doing business with Iran. Much of the original momentum behind this idea comes from efforts by individual states to divest from companies doing business in Sudan, because of its campaign of genocide over the last three years against the residents of Darfur.

The effort to divest from companies operating in Sudan due to the Darfur genocide is extremely important, but it should be broadened to divest from genocide, as a principle, wherever it has occurred. The legal determination that Ahmadinejad is indeed violating the Genocide Convention, through his repeated acts of incitement, should now be used to create a global alliance for punishing those who engaged in genocide in the past as well as those declaring their intent to carry it out in the future.

For years, Iran and its allies have tried to systematically delegitimize the State of Israel through fictitious charges about "Israeli war crimes." The time has come for Israel to counter with a campaign of its own, which unlike the accusations of its adversaries, is firmly grounded in international law and a growing consensus of increasingly significant international opinion.

The author, Israel's former ambassador to the UN, is president of the Jerusalem Center for Public Affairs.

-------
Now, let's make sense of all this. Let's begin with Irwin Cotler, a former President and Chief Council of the Canadian Jewish Congress (a kind of Canadian AIPAC), who is one of the inventors of the theory of "New anti-Semitism", a fraud denounced by Norman Finkelstein as a myth and a fraud (in his book Beyond Chutzpah and in debates on DemocracyNow) and by Raul Hilberg (who called it totally absurd).


Next comes Harvard Law Prof. Alan Dershowitz. He is, of course, best known for getting OJ Simpson off the hook. Dershowitz is also a recipient of the William O. Douglas First Amendment Award from the Anti-Defamation League of the B'nai Brith. He has been awarded honorary doctorates in law from Yeshiva University, the Hebrew Union College, Monmouth College, University of Haifa and Bar-Ilan University. He is the author of the book "The Case for Israel" (a good companion book to which is "The Case Against Israel" by Michael Neumann). Although Alan Derzhowitz is often referred to as a "civil rights lawyer", he openly advocates legalized torture. Dershowitz also specializes in defaming and even persecuting Jews who do not agree with Israeli policies such as Israel Shahak, Noam Chomsky and, recently, Norman Finkelstein who exposed Dershowitz as a plagiarist and fabricator on Democracy Now (full transcript, video). In a clear act of revenge, Dershowitz used his influence to have De Paul university deny tenure to Finkelstein.

And then there is John Bolton. Currently a at the infamour American Enterprise Institute, John Bolton is one of the few - but highly influential - non-Jewish Neocons. Bolton was such a universally despised creature that even the reflexively genuflecting 109th Congress clearly refused to accept his nomination as US Ambassador to the United Nations.

So that is the "unholy trinity" which stands behind the warmongering House Resolution 21.

The point of all that? Dore Gold clearly states:

"For years, Iran and its allies have tried to systematically delegitimize the State of Israel through fictitious charges about "Israeli war crimes." The time has come for Israel to counter with a campaign of its own, which unlike the accusations of its adversaries, is firmly grounded in international law and a growing consensus of increasingly significant international opinion"

So here we have it: this is yet another attempt to shift the attention away from the policies of Israel (Norman Finkelstein always points out that as soon as Israel is in trouble politically, its supporters start yelling about a "new anti-Semitism"). 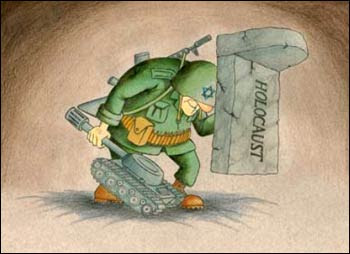 Not only that, but by calling it a "campaign of its own" Dore Gold clearly shows that all those in Congress who voted for this Resolution are doing the bidding of Israel by helping it in what is essentially a PR campaign.

We can be assured that the anti-anti-Semitism frenzy wil reach its climax soon and that by the time the Empire strikes on Iran the outrage over "existential threat to Israel" will have reached a new apogee.

In the meantime, the Israeli Air Force is training for air strikes on Iran.
Posted by VINEYARDSAKER: at 13:10