The truly staggering costs of US unconditional support for Israel

An increasing number of US public figures are breaking the old taboo and openly discussing the huge cost the US is paying for its unconditional support of Israel. From Michael Scheuer, to President Carter, from John Mearsheimer and Stephen Walt's to Scott Ritter, to the recent Republican Presidential debate in which Ron Paul dared to openly say that US policies in the Middle-East had something to do with the "blowback" on 911. What is less known, however, is the huge, absolultey stupendous financial costs of the US support of Israel. The figure is truly breathtaking: Since 1973, Israel has cost the United States about $1.6 trillion. That is not a typo, its *trillion*, not billion or million. That's 1,600,000,000,000 dollars or more than more than $5,700 per person.

These figures come from a detailed article in the Christian Science Monitor which quotes a study by the Thomas Stauffer, a Washington, DC-based engineer and economist who has taught the economics of energy and the Middle East at Harvard University and Georgetown University's School of Foreign Service and whose study was commissioned by the US Army War College. The CSM article gives a breakdown item by item of how Stauffer has arrived at this figure. Others have challenged both his figures and his methodology.

In his original 2003 report for the Washington Report on Middle East Affairs, Stauffer gives the item by item analysis of the figure for the total costs to American taxpayers of the Israeli-Palestinian conflict: $3 Trillion. That is four times more than the Vietnam war.

At a time when Americans are willing to vote for politicians who will reduce their taxes at the cost of drastic cuts in the already pitiful Social Security in a country with the worst healthcare system of the entire industrialized world, were a person on full invalidity get 700 bucks a month and has to co-pay for his medecines, where most war vetarans end up homeless at least for a while upon their return from war (grand declarations of "support our troops nonewithstanding), at a time when education, research, pensions, salaries and culture appropriations get slashed to shreds in the name of reducing costs, not a single politician dares to demand cuts in the "aid" Israel receives. Not even the fact that a former President speaks of "Israeli Apartheid" allows this issue to be raised.

Thousand of Americans displaced by Katrina are still sitting in tent camps, and their minute FEMA aid is being terminted, illiteracy and hunger have reached truly Third-World country levels, but the issue of US aid to Israel remains beyond discussion.

The Pollard spy scandal, the AIPAC spy scandal, the Israeli spies in the Pentagon, the various Neocon scandals (Libby, Wolfowitz), the so-called "Israel art students affair", or the many questions about what Israel might have known about 911 had exactly zero effect on this (and nevermind the old USS Liberty affair). Those who dare raise the issue are still inevitably called "anti-Semitic" even though this term has no logical meaning whatsoever.

Considering the ridiculously small percentage of Americans which have any personal ties at all with the Middle-East, and keeping in mind that most American Jews are not at all in agreement with the polices advocated by AIPAC and the rest of the so-called "Jewish lobby" - the fact that this aid has not been meaningfully challanged by a single US politicans truly attests to the iron hold the Zionist/Neocon lobby has acheived in the USA. 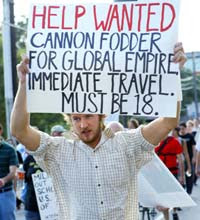 agression against Iran will deter anyone in the White House from attacking. Having spent 1,6 TRILLION dollars in direct aid to Israel, having suffered 911 as a consequence of its foreign policy in the Middle-East, having lost over 3'500 soliders and many hundered mercenaries in Iraq, having turned the entire planet (with the rather comical exceptions of Naru, Palau, Tuvalu, Micronesia and the Marshall Islands!) against itself, the regime in Washington will not hesitate for one second to start yet another imperial war against Iran. And if it costs another trillion dollars or thousands of American lives - who cares?! Certainly not those in control of the White House, the Imperial Senate or the US corporate media.
Posted by VINEYARDSAKER: at 15:12