The Empire's strike back - last preparations

There is no better source of information about Palestine than the excellent blog of the Palestinian Pundit. His recent posts outline a systematic plan for the invasion of the Gaza sector, the repression of its main democratically elected political party, Hamas, and the total destruction of that party throughout Palestine (at least that's the plan, whether it will work is a different issue).

First, the Empire is sending a poodle version of Darth Vador, Tony Blair, as a Middle-East

envoy. So much for the "negotiations" which, one would presume, will be between Abbas, Dahlan, Olmert and Netanyahu (or somebody equally acceptable to the Imperial High Command).

Second, the Imperial High Command abducts the most moderate Hamas leader who was attempting to bring the two Palestinian factions together.

Third, Imperial Stooges will be briefed on Monday about the Imperial plan to retake Gaza. The Palestinian Pundit has provided a translated summary of this plan as reported by Al-Akhbar, a reputable Lebanese newspaper:

The decision for decisive action against Hamas in Gaza has apparently been taken at many levels involving local and outside powers. The military component of the plan will be what Olmert will outline to Abbas, Abdullah and Mubarak next Monday in Sharm El-Sheikh, in Egypt.

Western and American sources in Cairo have revealed the existence of a draft joint U.S.-Israeli plan which will be proposed in that meeting. The plan includes political and military measures to force Hamas out of Gaza. Olmert will be pressing his Arab counterparts to let him carry out a "limited" military strike in Gaza to destroy Hamas' "infrastructure" and to end its control in Gaza. Simultaneous with that military operation, Israel will be targeting Hamas' leadership and both its political and military cadres.

An Egyptian official said that Egypt and Jordan are unlikely to agree to the plan. Western sources said that Cairo is concerned that such Israeli intervention would increase tension along Egypt's borders.

Israel's Radio stated that Olmert has proposed that a Saudi official attend the forthcoming summit to convey the impression that the Arab world stands behind Abbas. It is worth noting that the Saudi king will be in Cairo on Monday.

Lastly, Israeli authorities plan to hand one billion dollars to Abbas to finance his fight against Hamas. 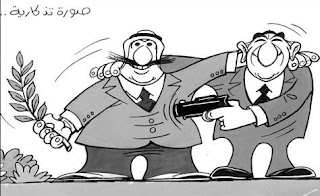 Clearly, Abbas has been upgraded from "irrelevant entity" to main ally in the war on terror, sole legitimate representative of the Palestinian people, moderate voice for democracy and peace and, last and not least, most dedicated friend of the Empire. Any disagreeing Palestinian will henceforth be considered as a "terrorist".

Make sure to regularly visit the Palestinian Pundit for news updates on the developing situation in Palestine.
Posted by VINEYARDSAKER: at 18:14