This is what the GWOT is really all about: war crimes and hatred

Check out this video posted on Live Leak:

On Live Leak this video is entitled "High Value Target (HVT) gets taken out".
What do you see?
I see an unarmed civilian running away.  Maybe it is indeed a terrorist, or some insurgency leader, but he is not dressed in any battle fatigue, nor does he appear to be armed.  In fact, let's assume that he is some kind of "High Value Target".  What do we see next?  The guy is clearly shot, which is confirmed by the voice of the soldiers recording it all on camera.  At this point, what we see is
1) an unarmed person who is also
2) wounded and obviously unable to flee or resist
In other words, this person is considered as "hors de combat" which the Geneva Conventions define as:

A person is 'hors de combat' if:

(a) he is in the power of an adverse Party;
(b) he clearly expresses an intention to surrender; or
(c) he has been rendered unconscious or is otherwise incapacitated by wounds or sickness, and therefore is incapable of defending himself;

provided that in any of these cases he abstains from any hostile act and does not attempt to escape.

Not only can this man not run anymore, we can even hear the voice of the US solider saying "not moving now, stationary".
We then see several shots missing him until one hits the man in the head and kills him.
The deliberate execution of a person hors de combat is a war crime regardless of the actual identity of the murdered person.
What makes this all even more disgusting are the reactions in the comments section of Live Leak.  Here I just show a sampling which happened to be at the top of the comments section: 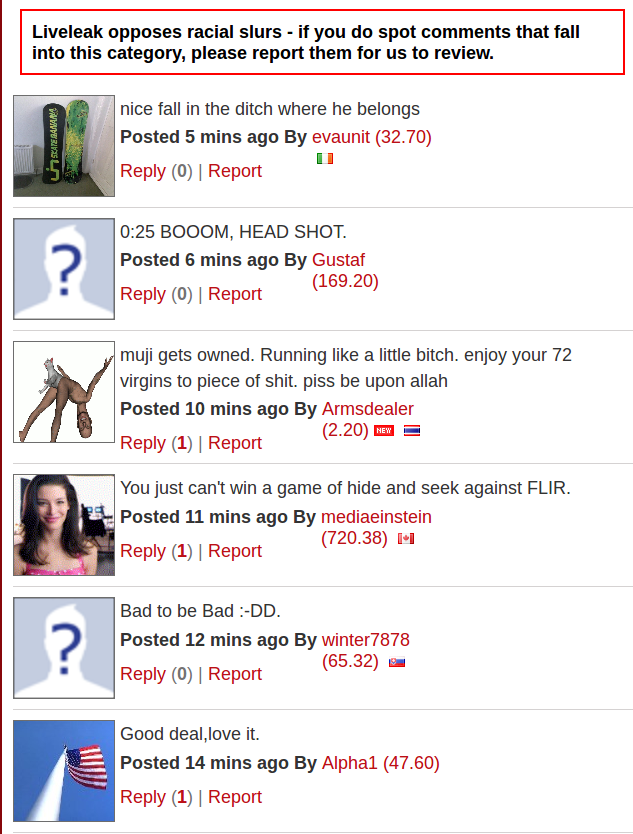 Clearly, the patriotic Neanderthals at Live Leak are absolutely delighted with this video.  And in spite of the obligatory and doubleplusgoodthinking sign at the top of the page opposing racial slurs, no such restrictions are placed on religious slurs.
What we see here is the very socio-psychological core of all the Imperial wars the USA has been waging for decades and, really, centuries: on one hand, murderous thugs who don't give a damn about any moral or legal principles of civilized mankind, and on the other, ignorant racist and bigoted brutes who engage in some kind of warped narcissistic projection and literally feel empowered by what "their" side can inflict on the "other" side.  The comment of "Armsdealer" is particularly revealing of the amazing "density of hate" (and ignorance) which can be packed into two short lines.
Wars of choice, wars of aggression, are fundamentally different from wars of liberation or defensive wars in that unlike the latter the former lack a moral or ethical basis.  This is hugely important: when a man fights for this country, nation, family or religion he does not need to demonize or dehumanize the enemy, nor does he need to come up with some convoluted logic to justify to himself and others why he is fighting. This is why for centuries man have come back from wars without turning into dysfunctional brutes.  But when is the last time the USA actually had to fight a war to defend itself against an enemy?  Even the American Revolutionary War does not qualify simply because it was fought by both sides over stolen land.  Hence the always present racist nomenclature used to dehumanize the enemy: spics, niggers, coons, injuns, gooks, ragheads, sand niggers, hajis, etc.


This is what this grotesque "Global War on Terror" does to people, on the battlefield and at home: its fills them with hatred and turns them into psychologically dysfunctional individuals.
Posted by VINEYARDSAKER: at 01:01