"The Tide Has Changed" is the latest record by Gilad Atzmon and his Orient House Ensemble and its celebrates the 10th year of collaboration of this fantastic group of musicians.
The first track, a tongue-in-cheek introduction to the album, immediately sets the tone with this joyful and deliberately silly lead-in to the album. Called "Dry Fear" - this track is paradoxically anything but fearful. The second track, however, "The Tide has Changed", while not exactly fearful, is a tense and powerful mix of modal and free improvisations on a entrancing beat with a strong Middle-Eastern feel to it. I like to think of the basic beat as a "Palestinian hard rock" kind of trance, but the improvisations are very clearly of a uniquely jazz level of virtuosity. Gilad's solos are - as always - an awesome thing to behold, yet the OHE's pianist, Frank Harrison, does an amazing job in replying to Gilad's virtuosity. Both musicians gradually built up their solos into a final explosive climax. 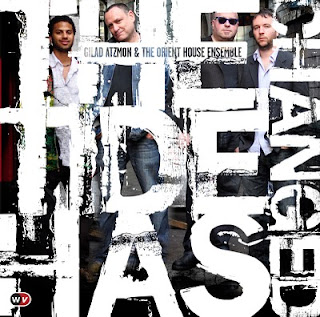 The next track continues on the theme of the second one and is entitled "And So Have We". A slow and melancholic composition, it reminds me of some of the most poignant pieces of Astor Piazzolla; Gilad's wife, Tali, further deepens this sense of "saudade" with her beautiful voice. Next, the bass and the piano engage into a sad yet beautiful dialogue which, again, Tali's voice punctuates. The lament concludes with quiet sense of peace. This is a very deceptively simple and absolutely beautiful track, one of my favorites on this album.
"Bolero at Sunrise" marks a break in style and substance. Beginning with an almost traditional rendition of Ravel's famous "Bolero", this piece rapidly mutates into something very different, a meditation, or even maybe trance, about the fundamental emotions of Ravel's piece, but expressed in a very different way. After a few Middle-Eastern notes, Harrison's piano opens the improvisations rapidly followed by Gilad's sax. Some commentators have felt the influence of Coltrane or Bird in this album, and maybe they are right, but what I hear is pure Atzmon, something qualitatively different from any of his brilliant predecessors. While possibly lighter than the previous track, this one is also an absolute jewel of sheer elegance and tone.
The second part of the album begins with a slow piano intro soon joined by the sax, to a piece called "London to Gaza", an immensely sad composition, filled with pain and raw emotional power. Then, the piece evolves into an explosion of emotions with, again, a trance-like feel to it. Though "London to Gaza" is the fifth track on this album, I feel that it is its central piece, it's core and center of gravity. Filled with pain and range, it's definitely the most complex and emotion-filled track of the album. And yet again I have to point out the absolutely amazing performance by Frank Harrison, whose piano is both an ideal match and contrast to Gilad's sax. If you had to listen to just one piece by Gilad Atzmon, this might not be the easiest one, but it would definitely be one of the most heartfelt ones. 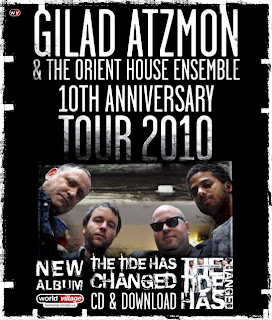 "We lament" is a much more restrained and slow moving meditation, written in pastel musical colors. It softly intertwines the always present sadness of Gilad's compositions with regular moments of real peace and stillness. "The lament" feels like a deep breath taken following the harrowing experience of "London to Gaza". I don't know if Gilad deliberately intended it as a sequel, a conclusion, to "London to Gaza", but that is how I experienced it. It is also a transition piece, at the next one is very different.
"The Back Seat of a Yellow Cab" is a much more whimsical piece, in particular when compared to the rest of the album. The musicians are all still brilliant, the recording excellent, but all in all, this one did not draw any emotion out of me, but maybe that's just me.
"All the Way to Montenegro" completely transforms the mood of the album. The piece is exuberant, joyful and filled with genuinely Montenegrin notes. It reminds me of all the wonderful evenings spent with my Serbian friends, grilling chivapchichi in a forest and drinking red wine. The Mediterranean is home to many different cultures, yet beyond their individual uniqueness, they all share a "Mediterranean commonality" and Gilad's performance truly makes him sounds like a Gypsy musician at a Montenegrin wedding (I don't know if Gilad has spent any time in Serbia or Montenegro, but he sure sounds like he has). Here the pain of life is utterly defeated and "All the Way to Montenegro" is a joyful and typically Slavic celebration of life "in spite of it all". 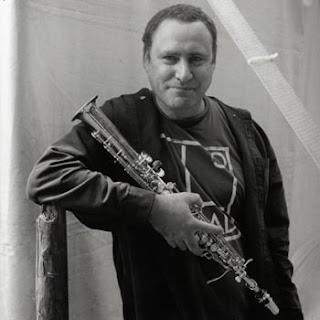 The album ends with "We Laugh" - a concluding counterpart to the album's first piece, another cabaret like piece, and a suiting conclusion of the exuberance of "All the Way to Montenegro".
Frankly, when it comes to Gilad's music, I am hopelessly biased: I love it all. Gilad is definitely one of the most original and creative jazz musicians out there, and every single one of his albums is a masterpiece. This is also true of this one. This said, Gilad's music is not immediately easy to listen to, and to fully appreciate it I would recommend listening to each track several times; the music is complex and yet very subtle and a superficial listening to it would probably makes you miss most of its beauty. Bottom line: get the album as soon as it becomes available where you live and listen to it with enough concentration and abandonment to really share into all the beauty of truth it contains.
The Saker
Posted by VINEYARDSAKER: at 22:14