by Carlo Moiana
Former president Néstor Kirchner has unexpectedly died today of heart failure. He was the first elected president of Argentina after the terrible economical and political crisis that the country suffered in 2001.
Kirchner had had some health problems lately: in February he had a surgery for problems in the carotid artery, and in September he had an angioplasty. His doctors recommended him rest, but he kept a very tight agenda: he was a congressman, president of the Justicialist Party (also known as Peronist, Argentina's biggest party) and Secretary General of the Union of South American Nations (Unasur). And, despite not having any formal position in the Executive, headed by his wife Cristina, he is known to be closely involved in it. 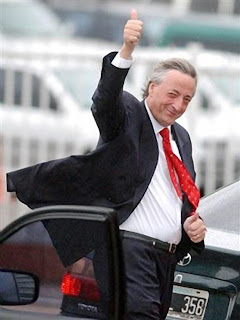 He began his political career as governor of Santa Cruz province, in Southern Argentina. Barely inhabited, it has a high income per capita, due to oil and gas extraction and a strong fishing industry. Despite of his leftist tendency, in the 90's Kirchner supported former president Carlos Menen (known for his strict neoliberalism) even in the privatization of Argentina's national oil company YPF, which has a strong presence in Santa Cruz. When the economy was beginning to show problems in the late 90's, he transferred the reserves of his province to banks abroad. Despite his affirmation that these funds have already returned to the country after the crisis was overcome, there are claims that part of these were diverted.
As a president, his government had two parts, one very good and another quite problematic. Initially he had the merit of further stabilizing the country after a terrible crisis. When he came to office, he managed to reach an agreement with the IMF and creditors over the defaulted national debt, began an economical policy of growth, recovering of industrial sector and low exchange rate to benefit exports. The economy began growing around 10% per year, unemployment drastically lowered, together with poverty, and his popularity soared.
But in late 2005 he sacked his Economy Minister Roberto Lavagna, and began a more unorthodox policy of high state expenditures. Inflation began to rise, and the government intervened the statistical institute so not to reveal true inflation data. While most independent economists calculate an inflation of around 30% annually, officially Argentina has an inflation of less than 10% per year. Argentina is the only country in the world with unreliable official economical data: not only inflation, but also GNP growth and poverty level data are also under suspicion.
Another merit of him was breaking at last Argentina's "automatic alignment" with the US. Since Menem became president in 1989, Argentina was the strongest ally of the United States in the region, even sending warships to the first Gulf War in 1991. In 2005, in a conference in the Argentinian city of Mar del Plata, Kirchner together with most of South American presidents rejected Bush's proposal for the Free Trade Area of the Americas, effectively burying this project. But then in 2006 he accepted the controversial US and Israeli version of the attack against the Argentine-Israelite Mutual Association in 1994, blaming Hezbollah and Iran for it. Argentina's foreign policy, though not so closely aligned with the US as in the previous decade, continues to be less independent than Venezuela, Bolivia, Ecuador and even Brazil.
His wife Cristina was elected in 2007, and followed exactly the same policies. Néstor is considered the true strong figure behind the president. Next year there will be presidential elections in Argentina. The political panorama was already complicated: Kirchner had a decrease in popularity, but he kept strong support in many sectors. And he was surely the most influent person in Front for Victory, the faction of the Justicialist Party currently in power and with the biggest representation in the Congress (though not having absolute majority). After his death, it's completely unpredictable for now what will happen in the next elections. Being also the first head of the recently created Union of South American Nations, his death also affects regional policies and the future political and economical integration of the continent.
The Argentine government is receiving condolences from all over the world, specially from countries with similar leftist orientation (both "moderate", as Lula in Brazil and Mujica in Uruguay, and "hard-liners", like Chavez in Venezuela and Correa in Ecuador).
Posted by VINEYARDSAKER: at 21:53