Remember the crisis which opposed the Russian Airborne Forces to the Minister of Defense Serdiukov (see here, here, here and here)?  Well, the counter attack from Serdiukov did not take long and it was really a case of a "full-spectrum" strike.

First, a "leak" was published in a Russian tabloid accusing Shamanov of using two Spetsnaz units from the 45th Special Forces Reconnaissance Regiment in Kubinka to defend the interests of Shamanov's son in law, Alexei Khramushin, a well-known "businessman" who currently has an international arrest warrant (for murder) issued against him.  Although nothing actually happened that day, a "declassified" (??) recording of what appeared as an intercepted and decrypted telephone conversation between Shamanov and one of his aides was leaked to the Russian tabloid Novaia Gazeta in which Shamanov can be heard ordering 2 Spetsnaz units sent to a business center belonging to Khramushin to prevent an inspection by judicial authorities.  When questioned about that, Shamanov answered that this recording had been a clever montage of a real conversation made by individuals with connections to Chechnia.  Needless to say, nobody ever wondered about who actually cracked the encrypted conversations of the C-in-C of the Airborne Forces or who leaked the recording to the press.
A few days later, the Ministry of Defense issued an official statement accusing Shamanov of acting in a way which does not correspond to his status has "Hero of Russia" (he received this medal after his highly successful campaign in Chechnia).
The entourage of General Shamanov then initiated their own investigation into who exactly what behind the so-called "recording" and who gave it to the media. 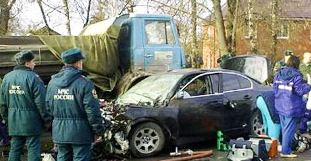 Now, to top if all off, Shamanov has been involved in a very serious car accident in which a truck suddenly crossed the road and slammed into Shamanov's car even though the road was flat and empty at the time of the accident.  Shamanov and a colonel traveling with him the the back seat are both alive, but in very heavy but stable condition in a hospital.  Shamanov's driver is dead.
The driver and passenger of the truck, both citizens of Tajikistan, first attempted to escape away from the place of the accident but where soon arrested.  The driver - Dovladsho Elbigiev - now claims that he was trying to avoid some "other vehicle" when he veered straight into Shamanov's car.
Coincidence?
Hardly.  This much rather looks like a typical campaign of the security services to discredit or even kill a dangerous opponent.  We can now expect the two Tajiks to be sentenced for manslaughter and sent to some remote prison where everybody will forget about them.  Shamanov and his aide will probably survive, but he will be retired for "health reasons" (with honors, of course!), and some super-pliable "yes sir!" kind of general will replace him as the head of the Airborne Forces.  As for the Airborne Forces, they will be further "reformed" by Serdiukov who then, his job finished, will also be promoted to some non-military position either in government or in the "private sector".  Lastly, this entire episode will be forgotten and nobody will ever wonder what really took place.  Unless...
Unless the Airborne Forces and other parts of the military refuse to keel over and play possum and strike back at those who are now clearly subjecting them to a "full-spectrum" attack.  Potentially, the Airborne Forces and the GRU are a powerful force which could push back against the Kremlin and its security forces, but this would require that strong individuals in both institution take charge and decide to act together.
In the meantime, the corporate press is the West has not reported about this story at all, not a single word.  They are, after all, busy discussion stuff like "terrorist plots" to ship bombs to US synagogues from Yemen via airmail...
What else is new?
The Saker
Posted by VINEYARDSAKER: at 17:58