Putin and Serdiukov have visited General Shamanov in the hospital 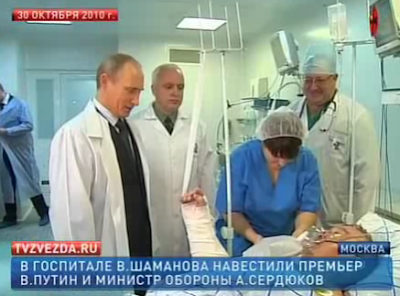 Vladimir Putin has visited General Shamanov on his hospital bed.  Shamanov is suffering from a cerebral concussion, a broken arm and a broken leg.  He should be operated on this Monday.  Russian TV showed a very sympathetic Putin warmly encouraging Shamanov who spoke to him through an oxygen mask.  Putin promised Shamanov that only the very best doctors would treat him.
Defense Minister Serdiukov also visited Shamanov, but no footage of their meeting was released.  Serdiukov declared that "Paratroopers are tough guys" and that Shamanov will soon re-join the ranks.
Posted by VINEYARDSAKER: at 18:32