THE FOLLOWING IS A ONE YEAR OLD REPORT PICKED UP BY MISTAKE:
MOSCOW, March 27 (RIA Novosti) - Russian military intelligence services are reporting a flurry of activity by U.S. Armed Forces near Iran's borders, a high-ranking security source said Tuesday.

"The latest military intelligence data point to heightened U.S. military preparations for both an air and ground operation against Iran," the official said, adding that the Pentagon has probably not yet made a final decision as to when an attack will be launched.

He said the Pentagon is looking for a way to deliver a strike against Iran "that would enable the Americans to bring the country to its knees at minimal cost."

He also said the U.S. Naval presence in the Persian Gulf has for the first time in the past four years reached the level that existed shortly before the invasion of Iraq in March 2003. 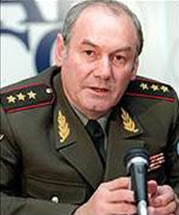 Col.-Gen. Leonid Ivashov, vice president of the Academy of Geopolitical Sciences, said last week that the Pentagon is planning to deliver a massive air strike on Iran's military infrastructure in the near future.

A new U.S. carrier battle group has been dispatched to the Gulf.

The USS John C. Stennis, with a crew of 3,200 and around 80 fixed-wing aircraft, including F/A-18 Hornet and Superhornet fighter-bombers, eight support ships and four nuclear submarines are heading for the Gulf, where a similar group led by the USS Dwight D. Eisenhower has been deployed since December 2006.

The U.S. is also sending Patriot anti-missile systems to the region.
-------

Commentary: General Ivashev is an interesting figure whom I happen to know personally (although not intimately; we met in the mid nineties and I have not seen him in many years). On one hand, he is closely connected to the Russian military intelligence service (the GRU), while on the other he is definitely an outspoken critic of the USA and of NATO. He clearly would have an interest in spreading any information detrimental those whom he sees as implacable foes of his country

Also, I have to note here that even though General Ivashev has been warning of a US attack on Iran many times already, this attack has not happened so far. Of course, this could be due to the fact that it was called off at the latest moment (I believe that this exactly what happened on at least one occasion).

Whatever the motives of General Ivashev's most recent declaration, his warnings should be taken very seriously because he is *exactly* the type of figure which the GRU would use to leak out classified information. Here is why:

While General Ivashev is hated by the Imperial press corps for being a "hardliner" (which he definitely is not, I can vouch for that), and while his latest statements will be dismissed or ignored, I would take his warnings extremely seriously.

The Saker
Posted by VINEYARDSAKER: at 00:14