Possible Serb responses to the estabishment of the "Kosova" Imperial protectorate

The recent Serb riots in Mitrovica have had a predictable result: Imperial stormtroopers have taken over from the EU police forces. Mitrovica is now under de-facto martial law and the martial forces imposing their law are not Albanian, but NATO, of course. So much for "independence".

The real capital of "Kosova" has never been Pristina, but Camp Bondsteel and there is no such thing as "Kosova": all there is is yet another Imperial protectorate. The good news is that most of the planet seems to understand that very well. As of today, only 30 out of 192 sovereign nations of the world have recognized "Kosova", and most of these are Imperial provinces anyway.

With time, and some good old arm twisting, more countries will end up recognizing "Kosova", but clearly not the majority who fully understand the appalling illegality of such a recognition (see their statements on this issue on the excellent Wikipedia page) and its possible consequences for the international (dis-)order.

In the light of these developments it is worth considering possible Serb responses to the Establishment of the "Kosova" Imperial protectorate.

First, it is quite clear what the Serbs should *not* do: attempt to liberate Kosovo by conventional military means. They have already clearly excluded this option anyway. Besides, considering the Albanian birth rates, a full reintegration of Kosovo into Serbia would have potentially very dangerous consequences. No, this option is out.

Local riots have successfully pushed EU police forces out of Mitrovica, which is excellent news for the Serbs as their direct interest is to keep Serb enclaves under direct NATO military control for the simple reason that as long as NATO is in, the Albanians are out. NATO understands this perfectly and sooner or later the Empire will attempt to force the establishment of an Albanian civil administration upon the Serbs under the protection of NATO stormtroopers and their guns. In other words, a NATO-Serbian armed confrontation is inevitable. What shape should it take? 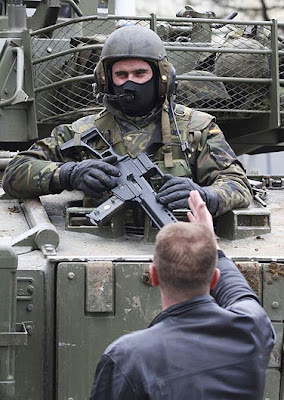 Think of Gaza, but with a border with Hezbollah controlled Lebanon. The basic Serb tactics and weapons will not be very different form what Hamas has been using in Gaza, minus the Qassams, of course. Just like the Israelis, NATO will attempt to sever the re-supply lines between the Serb enclaves and Serbia, but unlike in Gaza, the Serbs will have the option to engage NATO from both sides, just like the Talibans are doing along the Afghanistan/Pakistan border.

NATO will, of course, blame Belgrade and possibly strike at targets inside Serbia which will serve no identifiable options as the Serbian military will not need to be involved in anti NATO operations: there are plenty of semi-legal (and totally illegal) militias in Serbia and the entire region is awash in weapons. Training is not an issue either. Nor is personnel (there are plenty of Serbs who dream of settle scores with Imperial stormtroopers.

What NATO will not do is invade Serbia, not with the USA hopelessly bogged down in the Middle-East and not on the heals of a NATO defeat in Afghanistan. It is also clear that European NATO forces do not have the guts for another counter-insurgency operation, not having already been almost brought to a collapse over disagreements over the disaster in Afghanistan.

The fact is that the Empire is already over-extended and that time is on Serbia's side.

So the Serbian official response to the establishment of the "Independent Republic of Bondsteela" can be limited to three simple steps:

1. Refuse to recognize the legality of the occupation of its territory
2. Demand that the Empire return to the negotiating table with a *real* willingness to negotiate
3. Sit back and watch how the situation deteriorates all by itself

Eventually, all the parties involved will recognize that a negotiated solution is to everybody's advantage. The outline of such a solution is, of course, a partition of Kosovo. Ivan Eland has written an interesting piece on this subject. Needless to say, neither side will be happy by a partition of Kosovo, but no other alternative pragmatic solution is available under the current circumstances.