Excerpt of the transcript of an interview with the Chaiman of the JCS Adm. Mike Mullen,

Q. (...) So taking the nuclear question off the table, is there some other kind of military steps that should be taken to save the lives of American troops from Iranian weapons in Iraq? 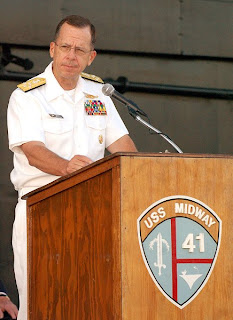 A. I think we can do some things. Clearly, there is a need to stop the — to stem the flow of that technology into Iraq and into Afghanistan. There is a very important focus on that right now on the borders on where it flows and on how to stop it, or how to make sure that once it’s in the country that it doesn’t kill Americans. That said, that doesn’t get at the source of it. I’m not — I think that the question you pose is still out there. And the question of should we in fact do that, and given the risks that are associated with that. And the implication is that should we in fact strike targets in Iran if we knew that’s where the, you know, if we had specifics about where that was coming from. That’s a, obviously, a very, very difficult question to answer because of the risks that are associated with doing something like that. It’s also one well above my pay grade, even in this job.

Q. But one that you may be asked for advice.

A. Absolutely. No, I clearly understand that. Part of the difficulty of — just because it is such a — because the risks could be very, very high and we’re in a conflict in two countries out there right now and I think we have to just give — we have to be incredibly thoughtful about the potential of in fact getting into a conflict with a third country in that part of the world with where we are right now.

So those are some of the thoughts. That is not intended to answer it one way or another except to say that’s a very, very tough problem that I don’t think — I don’t — there’s not a simple answer to. It’s a very, very — it’s one that has extraordinary challenges and risks associated with it.
-------
(Note: click here for the full transcript)
Posted by VINEYARDSAKER: at 01:29