My biggest fear about Ron Paul

I have to admit that I like Ron Paul. A lot. While Mike Gravel and Dennis Kucinch are also speaking up against the transformation of the USA into a Neocon empire, the former, while certainly sincere and well-meaning, is too prone to antics and the latter showed an unforgivable lack of courage when he abstained during the vote on the infamous House Resolution 1400. In contrast, Ron Paul has shown impeccable character and courage in opposing the Neocons and he has a sterling record on refusing to vote for idiotic and propagandistic resolutions in Congress. Nobody, not even his opponents. seriously disputes that he is an honest and dedicated man. 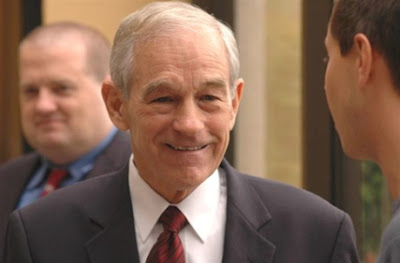 The fact is that Ron Paul is in a league of his own. Not only that, but from all the anti-Neocon candidates he is the only one who has a conceivable chance, however small, of getting the nomination of his party (that could only happen if the Republicans finally realize that Ron Paul is the only Republican who, being anti-war, could beat the AIPAC-controlled Hillary).

Some of Ron Paul's views raise concern among my friends. For example, Ron Paul's belief that the Social Security Administration, the CIA, the FBI or the IRS should be eliminated might, at first glance, appear somewhat bizarre, but one must keep in mind a couple of things here:

1. Many federal administrations have, in the past, proven to be highly ineffective (can anyone name a single success of the CIA?)
2. Some federal functions could be better implemented on the state level
3. These are long-term goals and not something which Ron Paul would try to immediately implement if elected
4. None of these reforms could be implemented without Congress anyway

These standard objections to Ron Paul's program really do not worry me at all.

More worrisome is Ron Paul's beliefs in the values of deregulation such as, for example, "Internet neutrality" which he opposes. I can only explain that kind of irrational phobia of any regulation, no matter how obviously needed, by the typical "blindspot" of all US libertarians who, on principle and by definition, consider anything "government" as bad and who therefore automatically blame any corporate excesses upon government and its supposed "corporatism". US libertarians are simply unable to accept the fact the corporations needs to be reined in by the civil society. They will always argue that a "truly free market" would resolve all issues of corporate greed, abuse, corruption and exploitation, nevermind that there has never, ever, been a truly free market anywhere and that there shall never be one either (the very concept of truly free market is based upon the idea of perfect competition which, in turn, is predicated on the two false assumptions of 1) perfect access by all to all information and 2) that information is free).

Nevertheless, this valid objection to Ron Paul's idea on corporate power versus society needs to be placed in context. For one thing, corporate greed and power has reached such levels in the USA that it can scarcely be made worse: the US is already a country "by the corporations and for the corporations" in which none of the mechanisms which serve to keep corporations in check in civilized societies (unions, laws, regulations, elected representatives, etc.) have survived. Frankly, there is nothing Ron Paul could do to make this situation worse. Furthermore, even if some regulatory control over the corporate world, or some meager social right of the US worker, could conceivably be removed by a Ron Paul administration it would only very marginally affect the social Auschwitz which the USA has already become. In fact, I would argue that considering how toxic many US regulations are, or how pathetically vacuous US workers "right" have become over the past decades, some reduction in the federal red-tape just might be helpful, in particular if state and local governments substitute themselves to Washington on a more local and decentralized level.

Lastly, any valid criticism of some aspects of Ron Paul's program should be contrasted with the two most salient and immensely important pillars of his entire worldview: a total rejection of imperial policies and wars of aggression abroad and an uncompromising dedication to civil rights domestically.

No, what really worries me about Ron Paul is something he said during an interview with Wolf Blitzer on CNN. When Blitzer asked him whether he would consider running as an independent third party candidate Ron Paul replied: "I never think about that, I have no intention of doing that".

Contrast this with this entry on the Lew Rockwell blog:
-------

The House He Lives in Really Is America to Him


A member of the Pittsburgh Ron Paul Meetup Group, who wishes to be known here merely as "Freedom Fighter," wrote the following to the members of our group today:

I am 60 years old. I have always voted for smaller government and to uphold the Constitution. I have never gotten what I voted for. Today I put my home up for sale. I am taking the proceeds and going to spend it promoting Ron Paul. That is the best way to spend my grandchildren's inheritance. They will benefit more by having President Ron Paul than having $100,000 of fiat money. Our lives, our fortunes, our sacred honor. The Revolution has begun.

Now that's putting your money where your mouth is!

Indeed, this is an amazing example of courage and dedication. The question I ask is what will happen to this man if Ron Paul does not get the Republican nomination or if he is not elected President? Would the "Revolution", to use the expression of this Ron Paul supporter, simply be over?

As I have written before, there is only one thing which stands in the way of an openly Fascist President in 2008: a so-called "third party" candidate who would seek to unite behind him on a minimalistic "Jeffersonian" political platform all those in the USA who care about peace and liberty. Considering that these are the values which brought a majority of Americans to send the Democrats into Congress during the last election it is not unreasonable to assume that a majority of Americans would now support such values if given the option, the total betrayal of these voters by the AIPAC-controlled Democrats.

Sure, there is a core of mostly "inbred rednecks" who still believe the lies of the Neocons and who would actually welcome the election of a Fascist President in 2008. And there is a core of pseudo-liberal Democrats who will vote for Hillary just because she is a woman or for Obama because he is Black. But if you give the American population the choice between Neocon imperialism and even more internal control on one hand and a return to a republic and an end to wars of agression on the other I think that no more than 30% of the population will choose the former.

Even if a third party candidate is not elected and even if, as seems likely, Hillary returns to the White House next year, the struggle will not be over. A Hillary Administration, or a Guiliani one for that matter, will fully hand over all US power to the Neocons and AIPAC. It does not take some amazing gift of prophecy to see what that will result in: a bloodbath in the Middle-East and an ugly, and possibly bloody, repression of the internal opposition inside the USA.

In this context I ask two basic questions:

1) Does Ron Paul have the moral right not to run as an independent if he does not get the Republican nomination?

2) Does Ron Paul have the moral right to simply go back to "life as usual" when a Fascist becomes the President in 2008?

My own and unequivocal answer to these two questions is a resounding: NO!

Not only does Ron Paul have a duty to his country, but he also has a duty to all his supporters, like the man who sold his house to give the money to the Paul campaign. For Ron Paul to simply leave the stage and let down all the people who truly believed in him and who sacrificed so much for him would be a complete betrayal.

If Ron Paul does not become President in 2008, by 2010 the entire county will be begging for him to come back and save whatever can be saved from the Neocon folly and its consequences. But if in the meanwhile Ron Paul simply goes back to Congress, or back to Texas, and leaves all his supporters crushed by disappointment, nobody will ever believe any politician again and Americans will cease to believe that there can be an alternative to Fascism. In that case the Ron Paul supporter who sold his house would have been wiser to keep it for his children.

Ron Paul can think about his nomination and election next year, but I sure hope that he also prepares for the worst-case scenario as well. I only hope that he misspoke when he said to Blitzer "I have no intention of doing that".

PS: FYI - click here for my two first articles about American fascism and the only thing which, in my opinion, can prevent it.
Posted by VINEYARDSAKER: at 18:38