Russian news sources are reporting the President Putin has chaired a meeting of the Security Council of Russia, the highest national security advisory board to the Russian President tasked with coordinating national security policies.  The SCR heard a report by the Chairman of the State Duma, Sergei Naryshkin, and the Chairwoman of the Federation Council, Valentina Matvienko, about their consultations with Vladimir Konstantinov, the Chairman of the Supreme Council of the Autonomous Republic of Crimea. I expect that this type of "consultations" with leaders of the eastern and southern Ukraine (the areas in blue on the map) will become more frequent 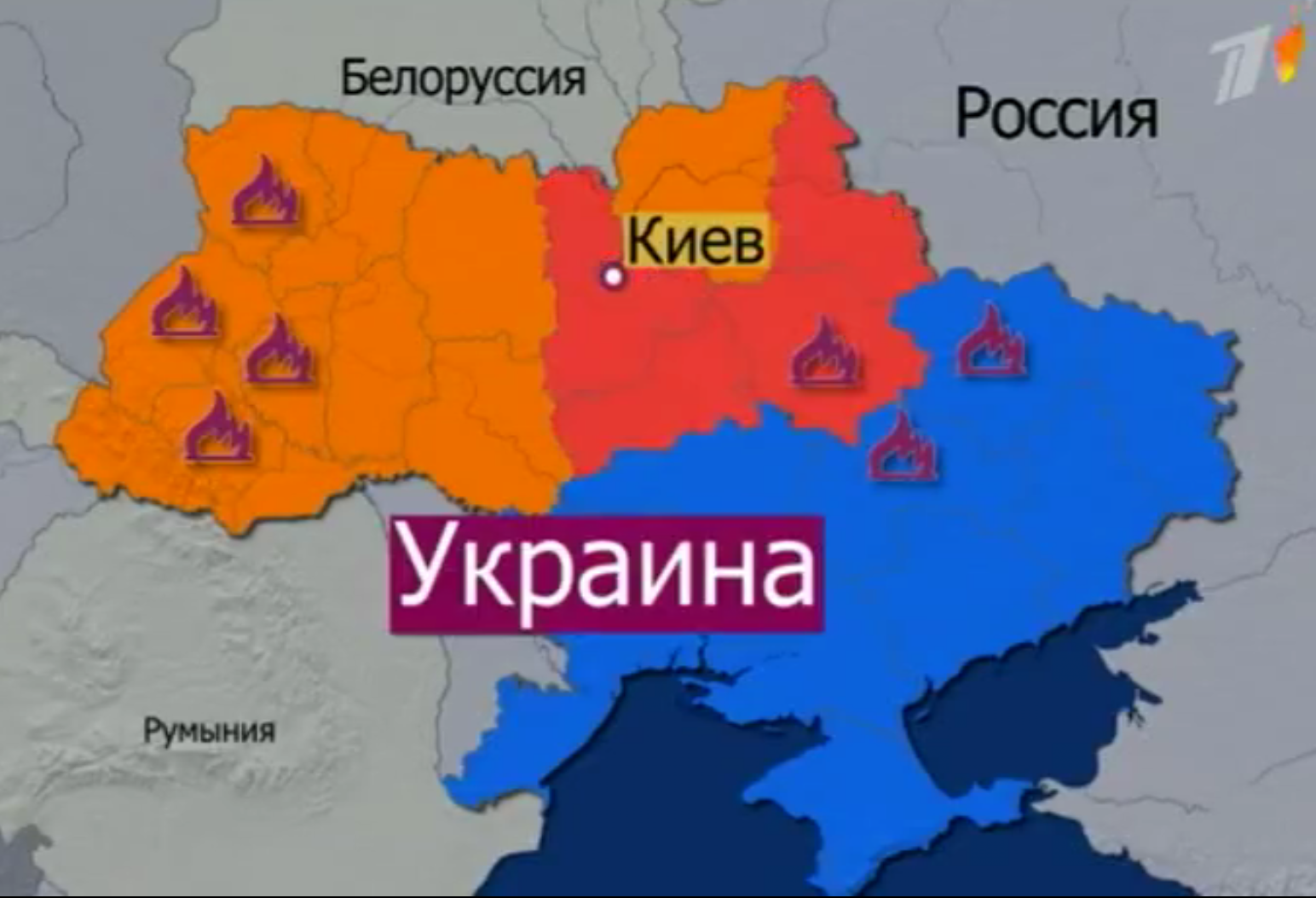 as the situation worsens in the rest of the country.

Yesterday, the governor of the region of Kharkov, Mikhail Dobkin, gave a long press-conference in which he outlined the measures taken by this region in response to the developments in Kiev.  Among other things, he declared that:

1) He had ordered the recall of the local Berkut forces from Kiev because he could not order them to go into combat against snipers without carrying their firearms.
2) Local authorities are conscripting volunteers in a regional defense force tasked to support the local police forces in case of any attempts by the nationalist insurgents to penetrate into the Kharkov region.
3) A number of documents have been per-approved which could be submitted to the local population in an emergency referendum if the nationalists seize power in Kiev.
4) The regional authorities are prepared to take over the functions of the central government, if needed, and to begin self-financing the region (the Kharkov region is the richest of all the Ukrainian regions and for years its revenues were used to finance the western regions of the country).
5) The local authorities were prepared to declare a state of emergency in the region and were ready to defend it by force of arms.

All in all, I am encouraged by the latest news out of Crimea and Kharkov and I think that I am beginning to discern the strategy these regions are planning to use to deal with the nationalist takeover in Kiev.

First, they will rely on local police forces supported by local militias to protect their regions from any invasion from the West.

Second, they will take over the functions of the Central Government and self-finance themselves.

Third, they will engage in intense consultations with Russia to coordinate their actions and obtain support when needed.

And make no mistake, while apparently purely "defensive" this strategy has a very "offensive" component to it: for decades the eastern and southern Ukraine has been feeding and financing the western regions and by cutting off their financial contributions for the Central Government the eastern and southern regions are essentially de-financing the nationalist regions (which are dirt poor to begin with).  If Napoleon (or Cicero - depends on who you ask) is correct, and money is the nerve of war, then by self-financing themselves the southern and eastern regions could wage a most effective economic war on the nationalist insurgency.  And that is a strategy Russia could, and I think should, back.

Should that not be sufficient, the south and eastern Ukraine appear ready to secede and declare their independence.

The crucial aspect of this strategy is that it completely bypasses the "Yanukovich problem": instead of counting on him to do something reasonable, this strategy has a ready response to each of his possible capitulations to the nationalist insurgents ranging from taking over some functions of the Central Government to complete secession and independence.  And this is also a strategy Russia can support, and not only on a Federal Level, but also on the regional level between the western regions of Russia and the eastern regions of the Ukraine.

So far, the Crimea and the Kharkov region appear to be in good shape.  I am much more worried about the Dnepropetrovsk city and region which is much further from the Russian border and which will find itself on the frontline of any East-West conflicts.  This is a big city (over a million people) in which the nationalist insurgents probably have many local supporters.  This city and region will inevitably become *THE* key prize for which both sides will desperately fight.  This could become the "Ukrainian Sarajevo".

The Saker
Posted by VINEYARDSAKER: at 14:40