First, the Israelis boycotted  a regular review by the UN Human Rights Council, the first time any country has done so.  Then they proceeded to bomb a target inside Syria.  That's all within 24 hours.

The fact is that Israel is totally out of control is hardly anything you.  Two years ago I already posted an article entitled Israel's "FUCK YOU!" to the world.  So the events of the past couple of days only confirm what we already knew: Israel is a rogue state gone crazy.

And they are hypersensitive too.

Did you see how Israelis went apeshit with indignation over this excellent caricature of Netanyahu: 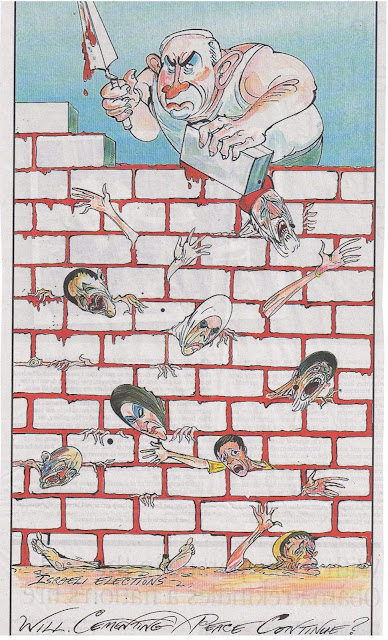 Efraim Zuroff, director of the Simon Wiesenthal Center’s Israel office, called the picture “absolutely disgusting.” Zuroff told The Times of Israel that it is “shocking” that The Sunday Times “has the incredible gall to publish such an anti-Semitic caricature of Netanyahu,” specifically on International Holocaust Remembrance Day, which is observed in Britain (...) Michael Salberg, the Anti-Defamation League’s director of international affairs, also slammed the cartoon, calling on The Sunday Times to apologize.  “The Sunday Times has clearly lost its moral bearings, publishing a cartoon with a blatantly anti-Semitic theme and motif which is a modern day evocation of the ancient ‘blood libel’ charge leveled at Jews,” he said in an emailed statement. “This is the stuff which historically justified hatred of Jews and led to the wholesale slaughter of Jews.”  On its Facebook page, the World Zionist Organization-Israel said that the cartoon crossed “all lines of decency and morality.”

Reading that nonsense one could be forgiven that all this hot air was triggered by a simple cartoon, not a genocide (in all fairness, some Israelis did not take the bait and immediately stated that there was nothing anti-Semitic in this cartoon).

Still, overall it is undeniable that, on one hand, the Israelis allow themselves to completely and comprehensively ignore both international law and world public opinion while, on the other hand, they also want the entire planet to treat them with some kind of awed admiration and love.  Any criticism of them, Jews and/or Israelis, is considered a ultimate in crimethink.

It is undeniable that, at least for ethnic Jews, Israeli is a democracy.  Yes, Ethiopian Jews are regularly the target of racists attitudes, but at least legally they are on the right side of the "legal Apartheid Wall" which separates Israeli Jews and Israeli non-Jews (Palestinian, Druze, Russians, etc.).  Israeli Jews do have a meaningful choice of parties and politicians and what their politicians are doing is very much in line with the desires of a Israeli Jewish public opinion which supports the use of nuclear weapons, Apartheid laws against non-Jews or a military aggression on Iran.  The of the past couple of days just add another proof to the immense amount of evidence showing that the entire Israeli society is completely insane.

The Saker
Posted by VINEYARDSAKER: at 16:29