Latest BBC headline: "Syria: Assad regime 'ready to use chemical weapons'. It's not only the BBC, by the way, this story has spread like a wildfire: 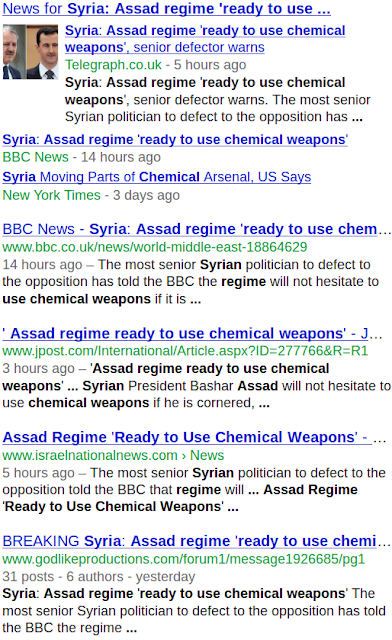 I guess that this is how a total canard becomes a "newsflash" even though it is based on exactly nothing. Indeed, check out what some ex-Assadist turncoat actually said:
"Asked if he thought President Assad might use chemical weapons against the opposition, Mr Fares told BBC security correspondent Frank Gardner in an interview in Qatar that he would not rule it out, describing Mr Assad as "a wounded wolf and cornered".

"There is information, unconfirmed information of course, that chemical weapons have been used partially in the city of Homs," he said.

Mr Fares's claim that Sunni Muslim militants in al-Qaeda are collaborating with a regime dominated by those from the minority Allawite sect will surprise many.

Challenged on his view that al-Qaeda was collaborating with the regime despite this, Mr Fares said: "There is enough evidence in history that lots of enemies meet when their interests meet."

He added: "Al-Qaeda is searching for space to move and means of support, the regime is looking for ways to terrorise the Syrian people."
Does that ring a bell?  When is the last time that a dictator was accused to being "ready" to use WMD and working with al-Qaeda?  Saddam, of course.  And it was already a total lie even then.
Really, to speak of Assad allied with al-Qaeda at the very same time when the Assad regime is desperately trying to contain the al-Qaeda led insurgency is simply Orwellian in its dishonesty.
The Saker 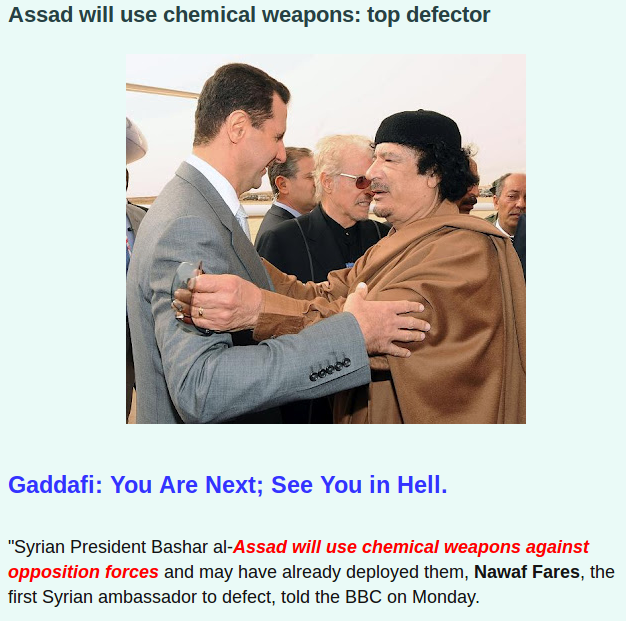