This has been a good day for Russia.  First, Russia and China both vetoed the US/NATO UNSC demanding regime change in Syria.  Second, the various demonstrations which took place in Moscow showed that no "Orange Revolution" is likely to take place in Russia, at least not in the foreseeable future.
Here is what took place at the UNSC:
As for the demonstrations in Moscow, here is what took place:
The biggest demonstration on Moscow today was a pro-Putin demonstration whose organizers had announced 15'000 people and who ended up with anywhere between 134'000-190'000 (depending on who you ask).  Here is a photo of this meeting: 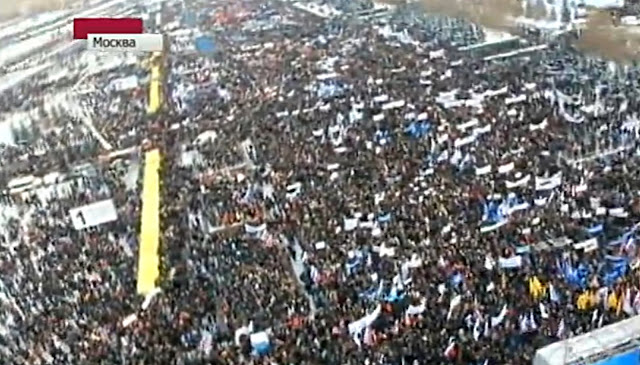 I have seen areal footage and I can say that it looked big.
Needless to say, the opposition declared that a) the real numbers are much smaller and b) that people were forced to attend this demonstration.  A typically "democratic' of condescendingly dismissing any and all  who happen not to agree with you..
The main slogan of this demonstration was "yes to honest elections, no to an Orange Revolution" thereby clearly showing that the organizers perfectly understood that what was happening to Russia was exactly the same trick which the US had played in the Ukraine, Iran, Kyrgyzstan and all the other color-coded revolutions.
The next big demonstration was the main anti-Putin was which according to the cops saw about 36'000 people and 90'000 according to the opposition.  Again, I saw some good footage on Russia TV and I can definitely say that the demonstration was of the same order of magnitude as the pro-Putin one.
Three movements participated in the big anti-Putin demo: the liberals, the Communists and the nationalists.  It was funny to see Grigory Iavlinsky, who had just attempted to present a mind-boggling 25% of fake signatures in support for his candidacy to the post of President asking for "honest elections".  But yes, the "Iabloko" (Apple) Party folks were there, alongside Communists and Nationalists.  Only in Russia...
Vladimir Zhirinosvky also had his own event, attended by about 1000 people.  He had to go at it alone, since he and his supporters were not welcome in any of the other demonstrations (as he explained it himself to the folks who came to listen to him).
There was also a tiny little mini-demonstration organized the the most pathetic pro-US 'liberals' in Russia: Mrs. Novodvorskaya and Mr. Borovoy.  About 150 people came to support these self-described 'democrats' whose democratic faith was so pure as to exclude walking alongside Communists and Nationalists.
There was no violence, nobody got arrested, and everything was nice and peaceful.
I would say that this was a good day for Russia.
The Saker
Posted by VINEYARDSAKER: at 00:34