It has been announced by the Russian media that that the authorities of the city of Moscow have given their authorization to a protest march by Russian Paratroopers demanding the dismissal of Defense Minister Serdiukov. The rally will take place on November 7th at noon.
According to the organizer of the march, General Achalov, Chairman of the All-Russian Аssociations of Veterans of "Union of Russian paratroopers" and himself a former C-in-C of the Airborne Forces, an extraordinary Congress of the Union of Russian paratroopers will take place on the 6th, followed the next day by a protest march of an expected 10'000 Paratroopers. 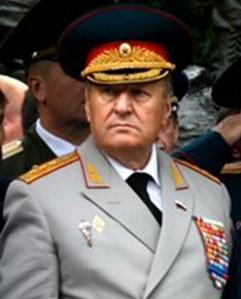 "We want to openly express our position so that people will hear us. We do not only demand that the Defense Minister Anatoly Serdyukov be sacked, but also that State Secretary of Defence Pankov and Chief of General Staff Makarov be sacked with him" declared Lieutenant-General Achalov (see photo)
Achalov added that numerous public organizations have expressed the desire to demonstrate with the Paratroopers to show their support for these demands, including Cossack organizations. Achalov concluded by saying that signatures are being collected to demand that the Russian President take action, investigate the events and sack Defense Minister Serdiukov.
While nothing forces the Kremlin to yield to such demands, the political impact of being so publicly rejected for Serdiukov will be devastating, I don't think that there has ever been in the modern history of Russia (or, of course, the USSR) such an open rejection of a top government figure by a labor union, veteran organization or the general public. That such an open rejection would come from the military, which traditionally is, as the French say, the "big silent" force. is quite extraordinary indeed.
It is also interesting that not only do the Paratroopers demand the sacking of the (civilian) Minister of Defense, but also the sacking of the Chief of Staff, General Makarov.  In US terms this would be roughly equivalent to a union of Marine Corps officers demanding the sacking of the Secretary of Defense and the Chairman of the Joint Chiefs of Staff!
It is a safe bet that the Kremlin attempt will bring down the full force of its immense security services to prevent this movement from becoming influential.  If Putin and Medvedev are really working hand in hand in these so called "reforms", then this movement is doomed.  But if, as some observers speculate, Putin and Medvedev are really in a locked struggle for power and if they really represent different constituencies, then the current rebellion of the Paratroopers could provide a powerful ally to Putin and his supporters.  It is, after all, a safe bet to say that the systematic policy of subservient approval of any and all US policies by Russia is also upsetting for many elements inside the security services, in particular the FSB.
The ball is now clearly in Putin's hands.  If he openly, or even semi-openly, sides with the military by showing "understanding" for their position, and if he quietly works behind the scenes to have Serdiukov and Marakov "promoted away" he might acquire a powerful ally.  If he fully sides with Medvedev and stands by while the latter uses every ugly trick on the book to crush this "rebellion" - we will know that the two are simply playing "good cop, bad cop" for the very same behind the scenes interests.
The Saker

PS: while nothing has officially been heard from the Russian Military Intelligence (GRU) or the Special Designation Forces (Spetsnaz) it controls, you can be absolutely sure that they support the Paratroopers for three key reasons: one, the so-called "reforms"  of Serdiukov have also resulted in the simple and total disbandment of at least two Spetsnaz Brigades and large financial cuts for the remaining Spetsnaz forces; two, Serdiukov actually attempted to completely disband the GRU as an independent Directorate and, three, the Spetsnaz have always been very close to the Airborne Forces under whose guise, or with whom, they often operate.  While the extremely strict secrecy regulations and traditions of the GRU and the Spetsnaz do now allow them to take any public action (yet), they represent another formidable force in support of the Paratroopers and against Serdiukov and his "reforms".
Posted by VINEYARDSAKER: at 13:27