Today's "minute of hate" will be directed at Russia

This masterpiece was published by The Guardian: 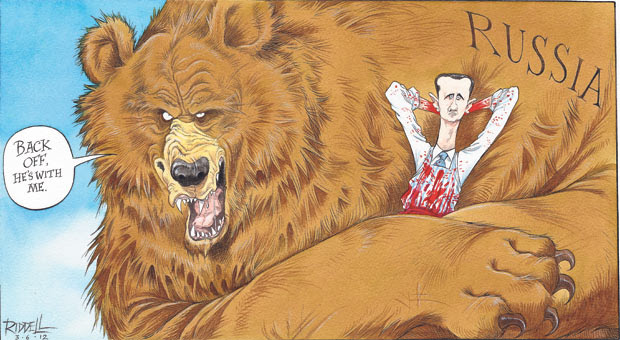 I wish I could say that this throws us all back to the Cold War, and basically repeat the words Medvedev recently address to that drooling idiot Romney:

"As to ideological cliches, I have already spoken on the subject. I always get very cautious when I see a country resort to phrasings such as "number one enemy." It is very reminiscent of Hollywood and certain period of history. I would advise two things to all US presidential candidates, including the person you just mentioned. My first advice is to listen to reason when they formulate their positions. Reason never harmed a presidential candidate. My other advice is to check their clocks from time to time: it is 2012, not the mid-1970s"

But having lived through the Cold War myself I have to honestly say that even during the Cold War we did not have such crude, illiterate, crass propaganda.  Well, we did, but only in the overly "yellow" press.  Not in a presumably reputable newspaper like The Guardian.  No, what we see today is really much more reminiscent of the kind of propaganda Europe was flooded with before and during WWII.
It takes a special, "ideologically-roasted", kind of militant cretinism to feel inspired, or even amused, by this kind of propaganda.  Clearly a good part of our society is degenerating into a level a brute stupidity not unlike the one which got huge crowds of hysterical drones to cheer Hitler into power.
Is anybody else also bothered by this?
The Saker
Posted by VINEYARDSAKER: at 03:37