As promised, here is a short report on what took place today in Moscow.  First, let's see what the BBC had to say: 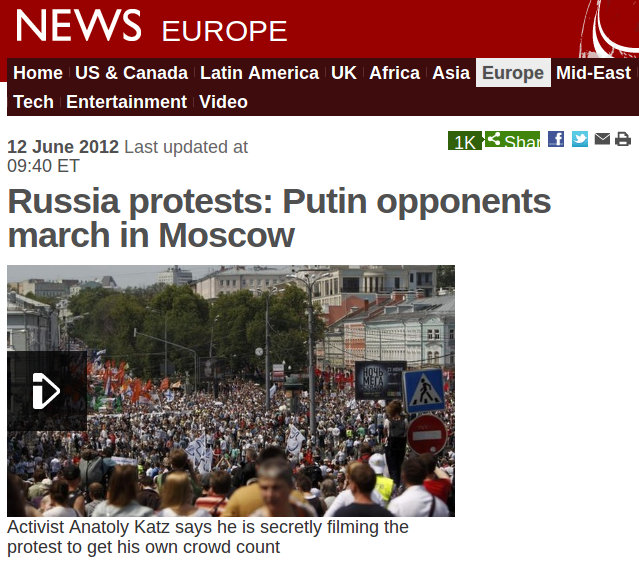 The caption is priceless!!  Turns out that some heroic freedom fighter & "activist" called Katz is *secretly* filming the protest to get his own crowd count.  I did not find the count, but I am sure that it must run in the millions.
But, seriously, is the BBC not aware that Moscow must have the highest ratio of cellphone/human in the world, and that all these cellphones have rather decent cameras.  What is the point of 'secretly' filming an event which is openly filmed by all its participants?
Actually, the Russian cops did something rather smart this time.  They send a helicopter up in the air who was broadcasting video and images live on the Internet.  Here is such a picture: 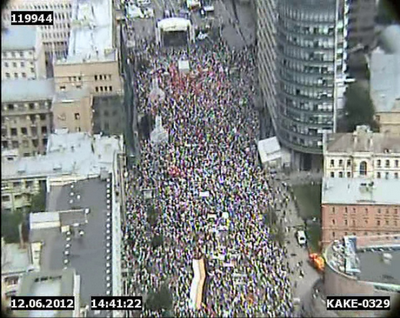 And just to be clear, of the various pictures offered, I chose the one with most people on it.
Also, for the fullness of the picture, here is an official RIA-Novosti picture: 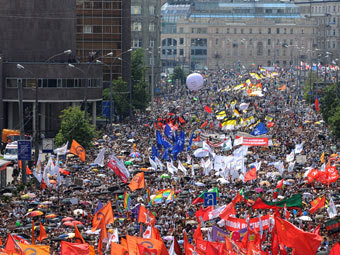 I would say that our freedom-loving Katz need not have worried about the demonstrations not being filmed, wouldn't you say?
Lastly, here is a TV report from one of the main channels about today's demonstrations: (no need to understand Russian, its all rather clear)
Bottom line - there was not even a hint of suppression in the "Kremlin controlled media" and the demonstrations were amply covered.
How many people showed up?  The cops say that the numbers began at 15'000, then swelled to about 18'000 during the march, then down to 10'000 due to rain at the concert.  One Eltsenoid spoke of 100'000, and another of 200'000.  We do know that the march organizers called the march the "March of the Millions", but that they scheduled it for 50'000.  My best guess is that the figures must have oscillated between 15'000-25'000 max.
The Western corporate media had predicted a massive turnout in protest against the laws against riots recently passed (increase of fines) and against yesterday's searches.  As far as I can tell, today's demonstrations were either on par or a tad larger than the ones on May 6th.  In other words, this was a non-event.
To recap: in a city of 10'000'000 (ten million) people, a demonstration bringing together pro-US liberals, communists, monarchists, homosexuals, anti-corruption protesters, ecologists, Stalinists, Fascists, Nationalists and any other type of discontents brought out well less than 50'000 people even though it took place on a major national holiday, in perfect weather, and with the full authorization of the authorities.
In other words, this was a non-event, Mr. Katz notwithstanding.
The Saker
Posted by VINEYARDSAKER: at 18:36