After Iran, now Russia.  According to exit polls and preliminary results, Putin wins in one tour with a crushing 64% of the vote.  Funny, since 64% was also the voter turnout in Iran yesterday. According to various media reports, the conservatives in Iran say that these results are a "great slap in the dirty and hateful face of the West" whose "Green" minions (Rafsanjani, Mousavi & Co.) had called for a boycott of the elections.  I would argue that the results in Russia are yet another, even more painful, great slap in the dirty and hateful face of the West".
Needless to say, the aforementioned "West" (i.e: the USA/NATO block) is dismissing it all as "fraud", "stolen elections", etc. etc. etc.
I for sure did not expect anybody in the "Western" imperial establishment to admit that the great and mighty US Empire got itself a double slap...
The excellent  news for me is that both Mironov and Zhirinovsky have accepted the results and, according to Russian media, have called Putin to congratulate him on his victory.  Of course, that pathetic clown Ziuganov refused to recognize these results, to the great joy of his new found allies in the Western corporate ziomedia.  We all remember how "fair" the election results were in the former Soviet Union with the Communists were in power, don't we :-)
Anyway, while I do not have an opinion on the Ahmadinejad<->Khamenei power struggle, I can unambiguously state here the following: the landslide election of Putin in one tour is excellent news for Russia and the rest of the world.  I say that not because I personally like Putin - I don't - but because that at this stage in Russian history he is the only political figure capable of strengthening Russia in all aspects and leading it through the very difficult times ahead.
For the West, the two "64%" votes of this weekend are, I would argue, a absolute disaster.  Clearly, neither Iran nor Russia are likely to succumb to any CIA sponsored "color revolution".  For all their very real faults and defects, the regimes in Russia and Iran are rock solid and stable simply because they are truly *popular* regimes, supported by an absolute majority of the people.  That does not mean that Iran and Russia do not have very real problems - they both do - or that the current governments are ideal - far from it.  What that does show though, is that these very real problems will be tackled by the people of Russia and Iran and not by foreign interests.
Finally, these results crush any hopes the US Empire might have had to somehow neutralize Russia and Iran by marring them in internal discord.  That is simply not going to happen.
Good.
The Saker 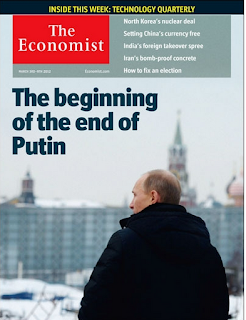 PS: in the next days and weeks we are going to be submitted to a barrage of news "reports" claiming that these elections were rigged and that the regimes in Iran and Russia are about the collapse.  This is what The Economist put on its front cover a day *before* the Russian elections:
I could choose the make fun of that kind of "journalism" but, frankly, this is getting tedious so I don't intend to pay any more attention to this kind of nonsense.
I discussed the Iranian presidential elections ad nauseam, and I discussed the recent elections to the Duma ad nauseam too.  I am done now, and if somebody believes that this week-end's elections were "stolen" based on idiotic ziomedia reports or on the personal biases of Pepe Escobar (whom I really like and respect, but who just does not "get" Iran and Russia) - fine.  I invite you to post your arguments here, but you will excuse me if I will not bother to refute them.
Posted by VINEYARDSAKER: at 00:05