Rabbi Ovadia Yosef, the head of Shas’s Council of Torah Sages, declares that “Goyim were born only to serve us"

The Jerusalem Post reports:
The sole purpose of non-Jews is to serve Jews, according to Rabbi Ovadia Yosef, the head of Shas’s Council of Torah Sages and a senior Sephardi adjudicator. 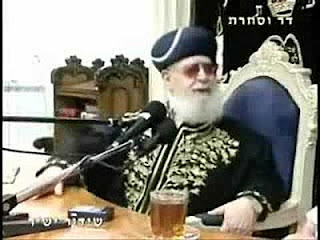 “Goyim were born only to serve us. Without that, they have no place in the world – only to serve the People of Israel,” he said in his weekly Saturday night sermon on the laws regarding the actions non-Jews are permitted to perform on Shabbat.
According to Yosef, the lives of non-Jews in Israel are safeguarded by divinity, to prevent losses to Jews.
“In Israel, death has no dominion over them... With gentiles, it will be like any person – they need to die, but [God] will give them longevity. Why? Imagine that one’s donkey would die, they’d lose their money.
This is his servant... That’s why he gets a long life, to work well for this Jew,” Yosef said.
“Why are gentiles needed? They will work, they will plow, they will reap. We will sit like an effendi and eat.
That is why gentiles were created,” he added.
Yosef’s Saturday night sermons have seen many controversial statements from the 90-year-old rabbi. In August, Yosef caused a diplomatic uproar when he wished a plague upon the Palestinian people and their leaders, a curse he retracted a few weeks later, when he blessed them along with all of Israel’s other peace-seeking neighbors.
Posted by VINEYARDSAKER: at 06:25