by Mizgin (author of the excellent Rasti blog)

"It could probably be shown by facts and figures that there is no distinctly American criminal class except Congress."
~ Mark Twain.

Yeah, okay . . . I wasn't going to say anything, but after hearing an overblown, completely undeserved eulogy for the dead Tom Lantos on the local public radio station, I'm not letting it pass.

You'll remember Tom Lantos from Sibel Edmonds' Rogues' Gallery. He spent most of his time in Congress, in the service of the Deep State, helping to hand Turkey the American weapons it needed to carry out a genocide of the Kurdish people. That's quite an accomplishment for the only Holocaust survivor in the US Congress.

And since he was a Holocaust survivor, he knew exactly what genocide was. He knew that what Turkey does to its own Kurdish population is genocide. He knew what the Ottomans did to their Armenian population was genocide. Yet, cynically, he introduced the Armenian Genocide resolution into Congress last year because he was still sore over Turkey's refusal to allow a US deployment from Turkey into Iraq in 2003, not because this self-styled Congressional human rights "expert" gave so much as a fig for a bunch of dead Armenians or the feelings of Armenian survivors. But, Lantos was always like that. 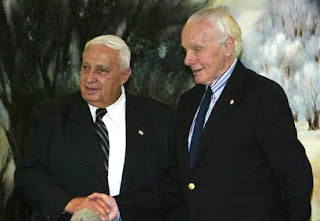 His only concern about "terrorism" in Turkey extended to attacks against synagogues and American allies, giving Lantos the chance to preach Global War on Terror, Inc., from his pulpit in the Congress.

Lantos never recognized the terrorism of the Turkish state against the Kurdish people which resulted in tens of thousands of dead in some twenty years, the forcible removal of Kurds from their lands and villages, the torture, rape, and extrajudicial murders that were so commonplace in the 1990s. Lantos never recognized Turkish terrorism that, in legal terminology, is properly called genocide.

The best obit comes from 2003, from the keyboard of Wayne Madsen, writing for Counterpunch:

He is a fake, a phony and a complete fraud. He constantly stresses his victimhood: first as a Holocaust survivor in Nazi-run Hungary and then as a refugee when the Communists took power. He fancies himself as the leading human rights specialist on Capitol Hill. In fact, this odious so-called Democrat is a master of deception and propaganda and a wallower in corrupt campaign money.

A variation of "corrupt campaign money" may be exactly why Sibel Edmonds included Lantos' photo in her gallery, only instead of campaign money, Lantos may well have been on the take for Turkish bribes, bribes that helped secure his loyalty to that great American and Israeli ally.

But Madsen's article mentions a minor item, something seemingly innocuous: "The relationship between Lantos and Hill and Knowlton, the agents of past brutal dictatorships in Indonesia and Turkey, makes Lantos's congressional monopoly on human rights advocacy an outrageous fraud."

Hill and Knowlton (H&K) was Turkey's PR firm of choice, at least in the 1990s. Lantos worked with H&K to sell the Gulf War. Interestingly enough, H&K also spins PR for the nuclear industry.

In addition to taking Turkish bribes, Lantos also may have been involved with the nuclear side of Turkish espionage, too, along with the State Department's former number 3, Marc Grossman.

All of it would be so ironic if it weren't so disgusting, and that's why we need public hearings on everything Sibel Edmonds knows.
Posted by VINEYARDSAKER: at 03:47