Cindy Sheehan - I'm Not Backing Off!

Call Out the Instigator

Call out the Instigator 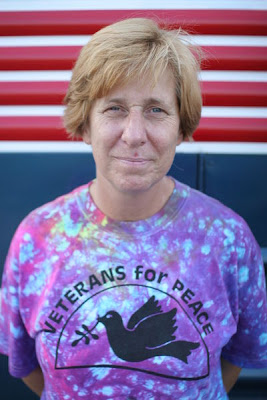 Because there's something in the air
We got to get together sooner or later
Because the revolution's here
You know it's right!

I'm not backing off. I tried to remove myself from the political realm of the US, what BushCo is turning into an Evil Empire, but the blatant audacity of George commuting Scooter's sentence (he's not ruling out a full pardon ---and you know he will) has dragged me kicking and screaming back in. I can't sit back and let this BushCo drag our country further down into the murky quagmire of Fascism and violence, taking the rest of the world with them!

I have sat quietly back these past five weeks as the slaughter in Iraq sorrowfully surges along with George's bloody escalation---and as the philosophical opposition to the war has soared to almost four out of every five Americans. I have remained silent when Senator Barack Obama said that impeachment is only reserved for "grave, grave" breeches! Well, BushCo has created hundreds of thousands of graves dug by their lies and greed. For cripes' sake, George admitted to breaking the FISA Act (which is a felony) that also breeched the 4th Amendment to our Constitution that already prohibited illegal search and seizure. How was Bill Clinton's offense graver than George's, Dick's, or Scooter's? Did we ever think that the criminality and arrogance of the Nixon White House would be eclipsed in our time with nary a "baaaah" from the Sheeple in Congress?

George has said that America doesn't "do torture" when we have all seen the images of torture from Abu Ghraib (don't believe your lyin' eyes) and know that hundreds of people sold to the US Army for an immoral bounty are incarcerated within the inhumane confines of Guantanamo Prison which is right in our own back yard.

I have had to bite my tongue---HARD---as the George and Dick crime cabal, (formerly known has the executive branch) have claimed that their offices are not to be held up to the same standards of accountability and control as any other entity in the human race, governmental or private.

It has been recently reported that Nancy Pelosi said that impeachment is not "worth it." Her faulty reasoning is that impeachment would take too much time because they don't have the votes. If they could "whip" their own Democratic caucus into shape to defend and protect our Constitution and the people of Iraq and our soldiers as they whupped, cajoled, threatened and browbeat the caucus into attaching "non-binding" time lines onto the last war funding bill, then impeachment would not only be possible, but likely.

The recent commutation of I. Scooter Libby's sentence, however, was the straw that broke my camel's back of exhausted ennui. Patrick Fitzgerald is a thoughtful and thorough prosecutor who did a heroic job of bringing at least one of the Bush Crime Mob to justice. Even though we were all very pleased, we knew that it was not enough and that Mr. Fitzgerald would delve deeper into the feces infested executive branch. The lawlessness of the Bush Administration has reached wild west proportions and the inmates definitely have control of the US(A)sylum.

A very dear friend of mine, Rev. Lennox Yearwood of the Hip Hop Caucus, is being harassed by the Air Force for "Conduct Unbecoming an Officer and a Gentleman" because "The Rev" fulfills his duty as an Officer and a Gentleman honorably by protesting Iraq and the Fascist Bush Regime almost constantly. The Rev is still in Individual Ready Reserve so the Air Force believes it is within its parameters to pursue the charges, although every "Officer and Gentleman(woman)" should be protesting the atrocious mistakes in the Middle East. After The Rev's hearing on July 12th, (in Macon, GA) he is going to begin a "symbolic" walk from the Reverend Martin Luther King's grave (Atlanta, GA) to DC---I am going to be there for him and to begin the march, but I am not going to make it symbolic.

We are going to walk from Atlanta, GA to Congress beginning July 13th and ending up in DC on July 23rd to send the mis-leaders back home to face the music of justice in their own districts.

It is about time us "peasants" (in the eyes of the Fascist Ruling Elite) march on DC with our "pitchforks" of righteous anger and our "torches" of truth to demand the ouster of BushCo. I have a dream of the detention centers that George has built and filled being instead filled with Orange Clad neo-cons and neo-connettes. 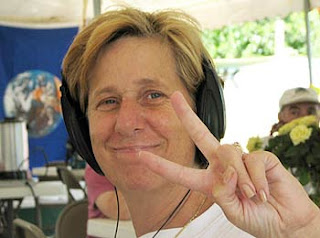 If Congress won't dig BushCo's political grave, it is the People's job to do so. Thomas Jefferson said that we need a Revolution every 20 years, or so, to keep our Republic honest. Over 225 years have passed since our last Revolution (if you don't count the War Between the States) and we are long overdue for one. Turn off your TVs, kiss your pets goodbye, bring the kids and flock to the federal seat of corruption, or join us on our walk there, for a People's Accountability Movement to be in the face of the Criminal BushCo and the Complicit Congress for the last week of session before they go on their undeserved vacations (why do they get vacations when the Iraqi parliamentarians don't?)

On the eve of our first revolution: You know it's right!

Author's note: Please, I already see "Attention Whore Back." If anyone thinks that I am going to walk hundreds of miles in the Deep South during July for attention, then please join us! We will be publishing our route and plans for Accountability events along the way, within the next few days. Stay tuned.
Posted by VINEYARDSAKER: at 02:01