US Envoys from Hell

The choice of US ambassadors to Central Asia and the Middle East gives one pause for thought, says Eric Walberg
The 711 coalition deaths in Operation Enduring Freedom in Afghanistan last year made 2010 the deadliest one for foreign troops since the US invasion in 2001, continuing the upward trend since 2003. 2011 promises to be even more deadly, and already includes the most spectacular event in this gruesome body count, when insurgents shot down a helicopter in eastern Afghanistan, killing 30 Americans.

Civilian deaths -- about 5-10 times higher -- have followed the same relentless climb, as have purported Taliban deaths which are about 10-20 times higher than the occupiers’ deaths. Deaths of all kinds in Pakistan have sharply increased in the last few years as well, with United States President Barack Obama's policy of using drones to fight US wars around the world.

US Special Representative for Afghanistan and Pakistan Ambassador Marc Grossman is now touring Central Asia to discuss his "New Silk Road" vision for the South and Central Asian region's economic future, the US State Department reports. He is visiting Dushanbe, Bishkek, Astana, Tashkent, Ashgabat, Abu Dhabi, Doha, Ankara, Kabul, Beijing, New Delhi and Islamabad during his grand tour of Eurasia. Grossman will return to Eurasia in November for the Istanbul conference on Afghanistan and in December for the Bonn conference where he hopes to build support for a “stable, secure, and prosperous Afghanistan in a stable, secure, and prosperous region". He is clearly very busy shaping a new order in AfPak, though hardly a silky one. 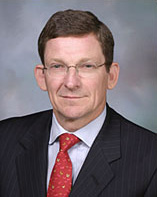 Grossman is a cypher. He has a long and shady career as a diplomat and corporate honcho. Most notoriously, he met with Pakistan's ISI intelligence agency head Mahmud Ahmed on 4 September 2001, shortly before the 11 September 2001 attacks, in his capacity as under secretary of state for political affairs, the department's third-ranking official. Ahmed was later dismissed from his post after it was discovered he had sent Mohamed Atta $100,000 at about the time he met with Grossman. The US government has not attempted to prosecute Ahmed, and the 9/11 Commission stated that the question of who financed the terrorist attacks was "of little practical significance".

Grossman was, in contrast, promoted and promoted by the State Department. In 2004, he was awarded the Foreign Service's highest rank -- Career Ambassador -- by president George W Bush. He received the Secretary of State Distinguished Service Award the following year, and took early retirement at the age of 54 to become vice chairman of The Cohen Group. This is a Washington DC firm founded by US secretary of defense William Cohen in 2001 to provide "global business consulting services and advice on tactical and strategic opportunities" to help multinational clients expand overseas, with offices in Beijing and Tianjin, People's Republic of China.

The Cohen Group is filled with ex-members of the White House, State Department, Defense Department, and Congress, including ex-generals, an ex-deputy secretary of Homeland Security – even an ex-secretary-general of NATO. Its publications in 2009 include "Smart Power is Soft Power", "The World Depends on US-China Cooperation", and "No time to cut missile defense".

In 2007, Grossman was subpoenaed in a case involving AIPAC and the transfer of sensitive information to Israel, along with Richard Holbrooke, who he replaced as special envoy to Afghanistan in February. Note that both Holbrooke and Grossman were/are Jewish Americans presiding over American war and occupation in Muslim nations.

But then Jeffrey Feltman is currently the assistant secretary of state for near eastern affairs and US hitman in Libya, while Gerald Feierstein is ambassador to Yemen as the US drops bomb after bomb on unsuspecting civilians there and just last week assassinated American citizen Anwar Al-Awlaki. While appointing Jewish ambassadors to Israel – the latest being Daniel Shapiro – is understandable, though hardly astute (Shapiro is a bosom buddy of Netanyahu), is the policy of putting them in such sensitive positions in the Muslim world, where the US is killing thousands of natives, really such a good idea? Is Washington fooling anyone, or is it sending a less-than-subtle message with these envoys?

That Afghanistan, Pakistan, and now Yemen and Libya have witnessed horrible scenes of death and destruction hardly goes unnoticed. Nor should Grossman take the smiles on his jaunts across Eurasia at face value. Certainly if we are referring to the face of the common people in these countries, as opposed to a paid-for neocolonial elite who are employed by Washington to carry out its orders.

But perhaps these moves in Washington's games are intended to convey a message to the Arab world. Just as Israeli Prime Minister Benjamin Netanyahu's 29 standing ovations during the special joint session of Congress and the Senate in Washington in May are part of a clearly orchestrated scenario. Palestinian Authority President Mahmoud Abbas was not invited to address such an august gathering last month in New York. In fact, his modest bid for observer status at the UN will be vetoed by Obama.

The message can only be that Israel and its supporters in the US thoroughly control US policy in the Middle East and Central Asia, from Morocco to Afghanistan. And, given such corporate-government spinoffs as The Cohen Group, this hegemony extends all the way to China. That despite any apparent Sino-American rivalry, China too will be incorporated into America-Israel Inc, given enough "smart power" wielded by the likes of Grossman in both their government and corporate capacities -- wielded baldly at one and the same time in Grossman's case, as both US special representative and corporate vice chairman.

Whether any of these "diplomats" were present for Netanyahu's address to Congress and the Senate is a moot point, but we can be sure that they would have joined in the 29 standing ovations. And we can be sure that the policies they are following, including Grossman's meeting with Pakistan's ISI head on the eve of 9/11, his subsequent tete-a-tetes with AIPAC spies, and his recent discussions with presidents and/or princes of at least a dozen Silk Road nations, will have Israel's best interests at heart every bit as much as what they conceive of to be America's.

Former president Clinton's counsel Abner Mikvner was not joking when he claimed back in 2008 that "Barack Obama is the first Jewish President." Obama's complete surrender to the Israel Lobby as his first term winds up has been attributed to the need to court the Jewish vote as he gears up to campaign for a second term. But maybe it's just inevitable, given the lobby's complete control of American politics as witnessed by the 29 standing ovations. 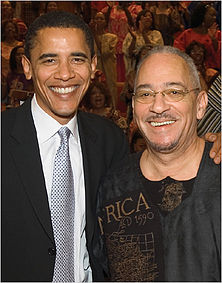 Back when Obama was still a free man, he attended Trinity United Church of Christ where the pastor was Jeremiah Wright. There can be no question that Obama admired and respected Wright; he even adapted Wright's eloquent "audacity to hope" for the title of his own autobiography. Wright said recently: “President Obama was selected before he was elected, and he is accountable to those who selected him. I’ll never forget one of the most powerful things he said to me in my home in April 2008. He said, ‘You know what your problem is? You have to tell the truth.’ I said, ‘That’s a good problem.'"
***
Eric Walberg writes for Al-Ahram Weekly http://weekly.ahram.org.eg/ You can reach him at http://ericwalberg.com/ His Postmodern Imperialism: Geopolitics and the Great Games is available at http://claritypress.com/Walberg.html
Posted by VINEYARDSAKER: at 11:31