They Better Run For Their Lives 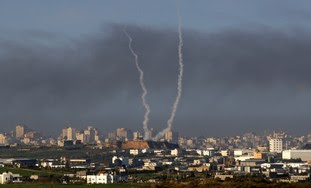 I have been monitoring the Hebrew press for the last three days and it is increasingly obvious to me and others, that no one out there, including Israeli top analysts, understands where the current escalation is leading.
However, a few things are becoming clear:
1. The so-called ‘Jewish spring’, known also as the Israeli ‘tents protest’, has been easily dismantled. The Israelis seems to be far more enthusiastic about wars than social justice. The naïve thinkers who believed that Israel was heading toward a 'social revolution' will have to eat their words once again.
2. The nature of the clash in the Egyptian border is far from being clear; yet, it is obvious that the IDF was caught unprepared. In reality, Eilat, the Israeli southern tourist resort, is in immanent danger of being cut off from the rest of the country. Israel, so it seems, doesn’t have the military answers to such a scenario.
3. The Israeli ‘Iron Dome’ anti missile system cannot provide the answers to the Palestinian's growing ballistic capability. It manages to intercept some missiles, but most missiles reach their destinations.
4. In spite of a further deterioration in its military power of deterrence, Israel is reluctant to deploy large forces into Gaza. Needles to mention that this is good news.
A few explanations for that reluctance are as follows:
A. Israel doesn’t possess the military means to impose a change in Gaza.
B. Israel is aware of the damage a ground operation may inflict on its public image.
C. Considering the volatile situation in the Middle East and in Egypt, any Israeli operation could easily lead to mass protest that would erase what is left of American interests in the region. Consequently, Israel holds back and swallows the bitter pill.
D. Israel also comes to realise that its security is dependent on Hamas’ strength. Thus, it prefers to negotiate a truce, hoping that the Hamas would become ‘Palestinian Authority number 2’. Israel still fails to grasp that resilience is an inherent reaction to oppression.
Conclusion
The sum of 1-4 may well prove to be devastating for the Israelis. There is no prospect of a future for the Jewish State in the region. Israel’s military might is proving to be dysfunctional, and unable to suitably deal with the conflict and its nature.
All those aeroplanes, tanks and nuclear bombs, increasingly, appear as futile.
In fact, there is not much that Israelis can do for themselves unless they, once and for all, attempt to grasp the true meaning of peace and reconciliation. Otherwise Israelis better run for their lives.
More and more of them are doing that, just as I did many years ago.
Posted by VINEYARDSAKER: at 14:45