How Lieberman Got Amazon To Drop Wikileaks

by Rachel Slajda for Business Insider
Early this week, after hacker attacks on its site, Wikileaks moved its operation, including all those diplomatic cables, to the greener pastures of Amazon.com's cloud servers. But today, it was down again and mid-afternoon we found out the reason: Amazon had axed Wikileaks from its servers. 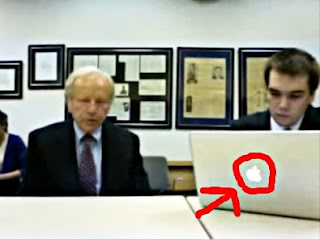 The announcement came from Sen. Joe Lieberman (I-CT), the chairman of the Senate Homeland Security Committee. Lieberman said in a statement that Amazon's "decision to cut off Wikileaks now is the right decision and should set the standard for other companies Wikileaks is using to distribute its illegally seized material."
Committee staff had seen news reports yesterday that Wikileaks was being hosted on Amazon's servers, a committee spokeswoman told TPM. The service, we should note, is self-serve; as with services like YouTube, the company does not screen or pre-approve the content posted on its servers.
Staffers then, according to the spokeswoman, Leslie Phillips, called Amazon to ask about it, and left questions with a press secretary including, "Are there plans to take the site down?"
Amazon called them back this morning to say they had kicked Wikileaks off, Phillips said. Amazon said the site had violated unspecified terms of use.
Amazon has not responded to requests for comment. Its terms of acceptable use include a ban on illegal activities (it's not yet clear whether Wikileaks has broken any laws) and content "that may be harmful to our users, operations, or reputation." It also prohibits using Amazon's servers "to violate the security or integrity of any network, computer or communications system," although Wikileaks obviously obtained the cables long before hopping on Amazon's servers.
The Electronic Frontier Foundation, a group that advocates for Internet freedom of speech by defending court cases, said the axing certainly doesn't violate the First Amendment. But it is, according to senior staff attorney Kevin Bankston, "disappointing."
"This certainly implicates First Amendment rights to the extent that web hosts may, based on direct or informal pressure, limit the materials the American public has a First Amendment right to access," Bankston told TPM.
Wikileaks is reportedly back on servers based in Sweden. Lieberman, in his statement today, called on "any other company or organization that is hosting Wikileaks to immediately terminate its relationship with them."
Phillips said Lieberman has no plans to reach out to other web-hosting services that may host Wikileaks, and has not contacted the Swedish government to discuss servers in its country.
"Sen. Lieberman hopes that the Amazon case will send the message to other companies that might host Wikileaks that it would be irresponsible to host the site," she said.
Alex Sciuto contributed reporting.
-------
Comment: This is what I wrote about Lieberman last June, and it still applies today: Joe Lieberman. "Evil Joe". Lieberman has this almost satanic ability to radiate evil and to always, always, be right in the middle of most, if not all, the really ugly and evil plans the Empire is cooking up for the rest of us. In the same vein as Kissinger, Perle or Dershowitz, Lieberman is a living caricature of the "evil Jew" of the Nazi propaganda. Why is that? Why do these guys go out of their way to match the most extreme anti-Jewish stereotypes? I just don't get it...

The Saker
Posted by VINEYARDSAKER: at 15:02