For the past week, newspaper readers across the world gazed at photographs of the dark young man who, sack slung over his shoulder, was caught on closed-circuit camera minutes before he opened fire at commuters at a busy Mumbai railway station.

Based on interviews with key officers involved in the investigation and on the interrogation records of the terrorist, The Hindu has been able to assemble key parts of the story behind the face. 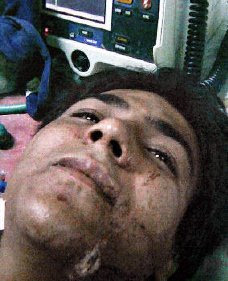 Mohammad Ajmal Amir Iman (wrongly identified earlier as Kamaal and Kasav) began his journey to Mumbai on September 15, 2008. He was part of a group of ten men who had spent months training in marine combat and navigation skills in Pakistan-administered Kashmir and Punjab.

Lashkar military commander Zaki-ur-Rahman Lakhvi, Iman has told investigators, showed them detailed maps of south Mumbai, and films of the targets they had been tasked to hit. Iman and his partner ‘Abu Umar’ — whose name, he learned, was in fact Mohammad Ismail — were tasked with attacking the Chhatrapati Shivaji Terminus.

Iman and the other terrorists were set to leave for Mumbai on September 27.

For reasons he claims to be unaware of, they were ordered to hold back. Late on November 22, Lakhvi finally gave the team a heads-up. At 4:15 a.m. on November 23, Iman and Ismail rowed out to sea along with four other groups: men Iman knew as Abu Akasha and Abu Umar; ‘Bada’ [Big] Abdul Rehman and Abu Ali; ‘Chhota’ [small] Abdul Rehman and Afadullah; Shoaib and Umar.

Each man was equipped with a Kalashnikov rifle and 200 rounds of ammunition and grenades. The group also had at least one state-of-the art Garmin global positioning system set, and several mobile phones fitted with SIM cards, which have now been determined to have been purchased in Kolkata and New Delhi. Three men had larger bags, packed with five timer-controlled Improvised Explosive Devices.

Near Indian coastal waters, the men hijacked a fishing boat. On reaching Mumbai, they rowed the last few nautical miles to Budhwar Park in an inflatable dinghy. From Budhwar Park, they travelled on to their targets by hailing taxis. Iman and Ismail reached CST as planned, and opened fire on the assembled commuters. While Ismail was killed when policemen at the site returned fire, braving grenades thrown at them, Iman was injured and is now in the Mumbai hospital.

Mumbai police officials were able to defuse two of the IEDs planted at the Taj Mahal hotel and a third at the Oberoi hotel, even as fighting broke out. This police action saved dozens of lives. However, two bombs went off in taxis used by the group, possibly after being abandoned in the vehicles.

Iman has told interrogators that right through the fighting, the Lashkar headquarters remained in touch with the group, calling their phones through a voice-over-internet service. In all likelihood, Indian investigators were able to intercept these calls, which would then form part of a compelling body of evidence to corroborate Iman’s account. In addition, Mumbai police sources said, investigators have succeeded in reconstructing the group’s journey through the Garmin GPS set that has been seized.