Is the CIA behind the "Free Tibet" campaign?

The Dalai Lama has been on the CIA payroll since the late 1950s. He is an instrument of US intelligence.

An understanding of this longstanding relationship to the CIA is essential, particuarly in the light of recent events. In all likelihood US intelligence was behind the protest movement, organized to occur a few months prior to the Beijing Olympic games.

Partly it is because he is so charming and engaging. Most published accounts of him breeze on as airily as the subject, for whom a good giggle and a quaint parable are substitutes for hard answers. But this is the man who advocates greater autonomy for millions of people who are currently Chinese citizens, presumably with him as head of their government. So, why not hold him accountable as a political figure?

No mere spiritual leader, he was the head of Tibet's government when he went into exile in 1959. It was a state apparatus run by aristocratic, nepotistic monks that collected taxes, jailed and tortured dissenters and engaged in all the usual political intrigues. (The Dalai Lama's own father was almost certainly murdered in 1946, the consequence of a coup plot.)

The government set up in exile in India and, at least until the 1970s, received $US1.7 million a year from the CIA.

The money was to pay for guerilla operations against the Chinese, notwithstanding the Dalai Lama's public stance in support of non-violence, for which he was awarded the Nobel Peace Prize in 1989. 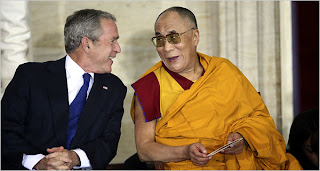 The funds were paid to him personally, but he used all or most of them for Tibetan government-in-exile activities, principally to fund offices in New York and Geneva, and to lobby internationally.

Details of the government-in-exile's funding today are far from clear. Structurally, it comprises seven departments and several other special offices. There have also been charitable trusts, a publishing company, hotels in India and Nepal, and a handicrafts distribution company in the US and in Australia, all grouped under the government-in-exile's Department of Finance.

The government was involved in running 24 businesses in all, but decided in 2003 that it would withdraw from these because such commercial involvement was not appropriate.

Several years ago, I asked the Dalai Lama's Department of Finance for details of its budget. In response, it claimed then to have annual revenue of about $US22 million, which it spent on various health, education, religious and cultural programs.

The biggest item was for politically related expenditure, at $US7 million. The next biggest was administration, which ran to $US4.5 million. Almost $US2 million was allocated to running the government-in-exile's overseas offices.

For all that the government-in-exile claims to do, these sums seemed remarkably low.

It is not clear how donations enter its budgeting. These are likely to run to many millions annually, but the Dalai Lama's Department of Finance provided no explicit acknowledgment of them or of their sources.

Certainly, there are plenty of rumours among expatriate Tibetans of endemic corruption and misuse of monies collected in the name of the Dalai Lama.

Many donations are channelled through the New York-based Tibet Fund, set up in 1981 by Tibetan refugees and US citizens. It has grown into a multimillion-dollar organisation that disburses $US3 million each year to its various programs.

Part of its funding comes from the US State Department's Bureau for Refugee Programs.

Like many Asian politicians, the Dalai Lama has been remarkably nepotistic, appointing members of his family to many positions of prominence. In recent years, three of the six members of the Kashag, or cabinet, the highest executive branch of the Tibetan government-in-exile, have been close relatives of the Dalai Lama.

An older brother served as chairman of the Kashag and as the minister of security. He also headed the CIA-backed Tibetan contra movement in the 1960s.

A sister-in-law served as head of the government-in-exile's planning council and its Department of Health.

A younger sister served as health and education minister and her husband served as head of the government-in-exile's Department of Information and International Relations.

The Dalai Lama might now be well-known but few really know much about him. For example, contrary to widespread belief, he is not a vegetarian. He eats meat. He has done so (he claims) on a doctor's advice following liver complications from hepatitis. I have checked with several doctors but none agrees that meat consumption is necessary or even desirable for a damaged liver.

What has the Dalai Lama actually achieved for Tibetans inside Tibet?

If his goal has been independence for Tibet or, more recently, greater autonomy, then he has been a miserable failure.

He has kept Tibet on the front pages around the world, but to what end? The main achievement seems to have been to become a celebrity. Possibly, had he stayed quiet, fewer Tibetans might have been tortured, killed and generally suppressed by China.

In any event, the current Dalai Lama is 72 years old. His successor — a reincarnation — will be appointed as a child and it will be many years before he plays a meaningful role. As far as China is concerned, that is one problem that will take care of itself, irrespective of whether or not Australia's John Howard or Kevin Rudd meet the current Dalai Lama.

-------
On the same topic, I want to share two videos made by Chinese bloggers on the topic of Tibet:

Commentary: I suppose that after posting all of the above I might appear to some as hopelessly anti-Tibetan or pro-Chinese. I am neither. In fact, I don't have much knowledge of this issue, much less so a real opinion. What I do know is the following:

1) That while the politically correct world is screaming about the "Free Tibet", nobody seems to care that Kurds, Palestinians and many others are slaughtered and tortured on a daily basis.

2) That the anti-Chinese Olympics campaign has all the hallmarks of a US strategic psychological operation.

3) That the PRC is gradually being pushed by the Neocons into the "next threat" role.

4) That the case for independence of Tibet is very far fetched at best.

5) That the Western media has been promoting the Dalai Lama as some kind of "holiest of holies" figure for decades, and that makes me deeply suspicious.

6) That we are all swamped with the "Free Tibet" propaganda. Another point of view is - by definition - something interesting.

These are the reasons why I post all of the above. Don't seek any other, there are none.