Preamble by Gleb Bazov: It is rare that we report on the workings of the aggressor across the battle lines. This item is different. Before you is a translation, kindly prepared by Valentina Lisitsa, of a report from the head of the Ukrainian Security Service, V.O. Nalyvaichenko, to the President of Ukraine, P.A. Poroshenko. It is an important document, which, we hope, you will distribute widely.
No further commentary is necessary, other than the following brief quotation. According to V.O. Nalyvaichenko, "2/3 of the active combat military units currently participating in the ATO will simply cease to exist in as little as 4 to 5 days" due to mass desertions and casualties. To provide context for this letter, provided below is another document recently publicized as an internal memorandum from the Ukrainian Ministry of Defence, which details recent casualties of the Ukrainian army, equally as catastrophic as its desertion rates
Report by Head of SBU, V.O. Nalyvaichenko, to the President of Ukraine, P.A. Poroshenko
Translated by Valentina Lisitsa 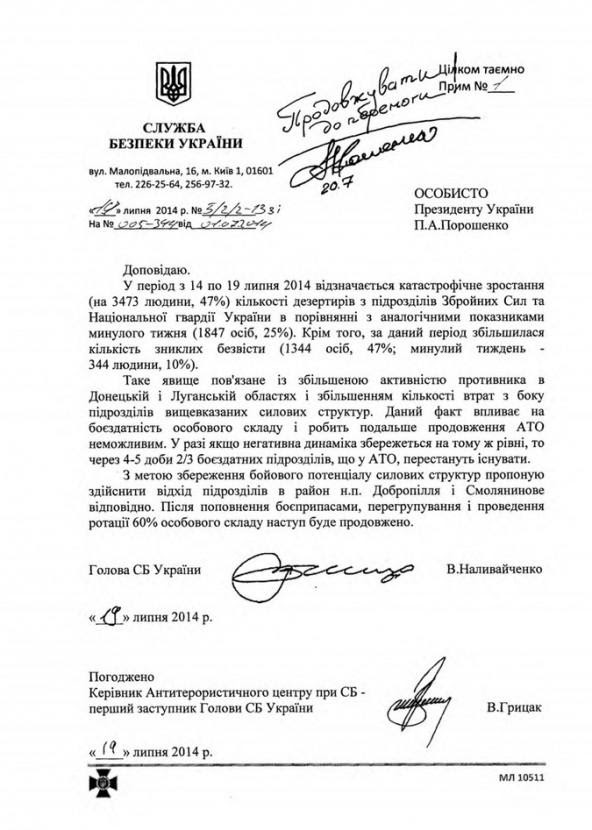 Header Left:  Security Service of Ukraine.  16, Malopidvalna St.,  Kiev, 01601
Tel: 226-25-64, 256-97-32, July 19 2014,  No. 5/2/2-1331
Header right:  Absolutely Confidential (Addendum 1)
Personally to the President of Ukraine, P.A. Poroshenko
Handwritten Across the Top: "To continue until Victory!"
Signed V.O. Nalyvaichenko 20/7 [July 20]
I am reporting.
In the period from July 14th to 19th, 2014 we witness a catastrophic increase (of 3473 people, or 47%) in the number of deserters in the units of the Army and the National Guard – in comparison with last week’s numbers (1847 people, 25%). Apart from that, during the stated period the number of missing in action had increased as well (1344 people , 47%, last week – 344 people, 10%).
This phenomenon is connected to increased activity of the enemy in the Donetsk and the Lugansk regions as well as to the increase in the number of casualties in the ranks of the above-mentioned structures.  This fact [negatively] influences the combat-worthiness of the personnel and makes continuation of the ATO impossible. In the event the negative trend continues at the same level, I estimate that 2/3 of the active combat military units currently participating in the ATO will simply cease to exist in as little as 4 to 5 days.
With the aim of preserving the combat potential of our military structures, I am proposing that we perform a withdrawal maneuver of our militarily units to the area around Dobropil'ya and Smolyaninove. After replenishment of the ammunition stocks, re-grouping as well as rotation of the personnel by at least 60%, we can continue the offensive.
Signed,
The Head of the Ukrainian Security Service of Ukraine,
V. Nalyvaichenko
Agreed,
The head of the Antiterrorist Centre of the Security Service,
B. Hrytsak
Official Ukrainian Military Report of Losses for July 9-15, 2014(Arsen Avakov, Minister of Interior and V. Gritsak, Head of the ATO)
Translated by Gleb Bazov 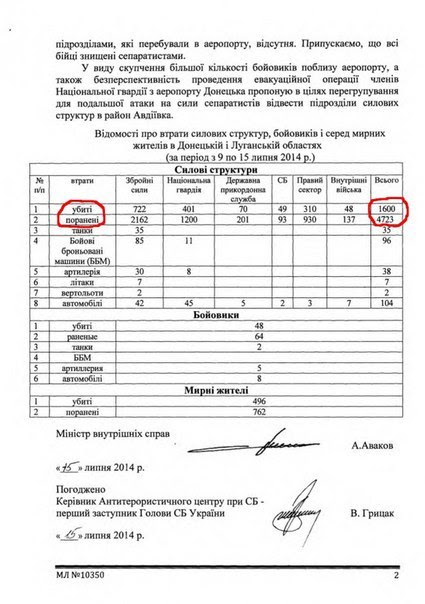 ... We admit the possibility that all the fighters have been purged by the separatists.
In vide of the concentration of a large number of fighters near the airport, as well as lack of prospects in conducting an evacuation of the members of the National Guard from the Donetsk airport, I propose to withdraw the units of the Ukrainian military to the area of Avdeevka in order to regroup them for a further attack against the forces of the separatists.
An Accounting of the Losses among Ukrainian Military, the Militants and the Civilians in the Donetsk and the Lugansk regions (for the period from July 9-15, 2014)
TOTAL UKRAINIAN LOSSES
TOTAL MILITIA LOSSES
TOTAL CIVILIAN LOSSES
SIGNED & SUBMITTED BY: Arsen Avakov (Minister of Interior) and V. Gritsak (Head of the ATO)
Posted by VINEYARDSAKER: at 13:05